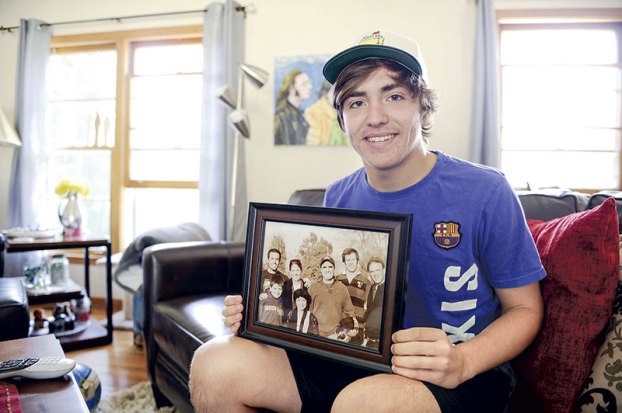 Austin High School student and soccer player Matias Parada holds a family portrait that includes his father who passed away this year from cancer. Eric Johnson/photodesk@austindailyherald.com

A year on the brink; AHS athlete finds solace in sports after moving across the country and losing his father to cancer

When Matias Parada decided to play soccer for the Austin Packers last fall, he wasn’t planning on staying for more than a semester.

He was going to play soccer for Austin in the fall, finish out the semester and then return to his home in Tuscon, Arizona.

But as Austin’s soccer season was winding down, Matias was confronted with the biggest hurdle of his life when his father Renato was diagnosed with renal cancer in October. That changed everything and the Parada family decided to stay in Austin.

Renato passed away in March and now Matias is going to finish his senior year in Austin. Renato, who grew up in Chile, was all about faith, family, strength and honor and Matias is hoping to live his life with those things on his mind.

While it was an incredibly tough year for the Parada family, Matias’ mother Kathy said that he and his younger sister Priscilla handled it with the strength and honor that their father stood for.

“I’m really proud of Matias and Priscilla. It was a rough year,” Kathy said. “We had the house full of visitors from Chile and all over the United States. They both kept up with their school work, they both were here for Renato and they were with him all of the time helping. Both Matias and Priscilla amazed me with their strength. They did great, both of them.” 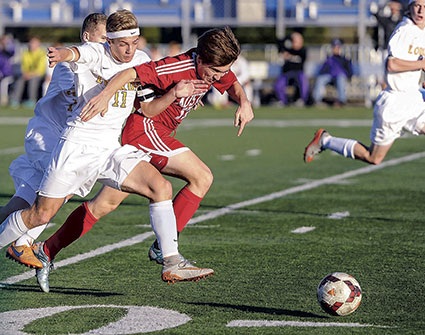 Austin’s Matias Parada battles with Rochester Lourdes’ Joe Novak during the first half of the Section 1A title game last October in Rochester. Herald file photo

A connection through soccer

Ever since he was a young boy, Matias could recall his dad yelling in front of the TV about a great goal that had just been scored. Renato would always be watching soccer and soon Matias joined in. The two watched a lot of Barcelona soccer together and they often watched the sport to learn more about it.

Renato had played golf and soccer in college and it didn’t take long for Matias to pick up soccer. Renato never pressured his son to play, he simply supported him.

Matias remembered when he was younger and he struggled to do eight straight juggles with a soccer ball and he never thought he would get up to ten. With his dad’s encouragement and a lot of practice he improved over the years and Matias can now do close to 300 juggles in a row.

“I’ve never been the quickest or the strongest, but the technical aspect of the game has helped me,” Matias said. “My dad always encouraged me and he kept me practicing away from practice. He’d always give these little bits of advice after each game. He wouldn’t hound on me about all of the things I did wrong and he wouldn’t tell me all of the things I did right. He would just give me one little thing to work on for the next game. That really helped me a lot.”

Matias became a big fan of his dad’s favorite team — Real Madrid and he recalled watching every one of their games for two straight seasons with Renato. Eventually, he was able to make a trip to Spain with his dad to watch Real Madrid play Barcelona.

It was a very memorable trip for Matias as it took place during his sophomore year of high school.

“t was really crazy to see how much soccer was part of the society in Spain,” Matias said. “It was everywhere.”

After Renato passed away, it just so happened that Chile was coming to Chicago to play in the Copa America tournament and Matias attended the game with his mother.

“I’ve got to keep supporting Chile now that my dad’s not here,” Matias said. “I’ll do it for him.”

From Tuscon to Austin

While Renato and Kathy lived in Iowa, Minneapolis, Miami, California and Chile before Matias was born, he always knew Tuscon as home. He was born there and he went to school there. Since Kathy was from Austin, the family would often visit her mother to avoid the summer heat in Arizona.

That house, which Kathy’s parents built in 1954, is now the home the Parada’s are living in.

“We came up every summer to take care of my mom and she passed away at 97 a few years ago,” Kathy said. “The kids wanted to keep coming in the summer so we bought the house.”

When Matias first began his visits to Austin, he spent time with family and didn’t get out much.

In his seventh grade year he stayed for one semester of school and played fall soccer with Austin’s C squad and that helped him make some friends. After that year, he began to come back and play summer soccer in Austin.

“If I didn’t play soccer here it would be much, much different,” Matias said. “That’s where I’ve made all of my friends and that’s why I chose to do my senior year here too.”

Bradyen Merritt, one of Matias’ best friends, didn’t meet him through soccer, but the two now play the sport together.

Merritt has grown close to the Parada family and he made a trip with Matias to Arizona over spring break.

“His family pretty much took me in and they’re like a second family to me,” Merritt said. “It’s like a Disney story. They just take you in and add you to a very big family.” 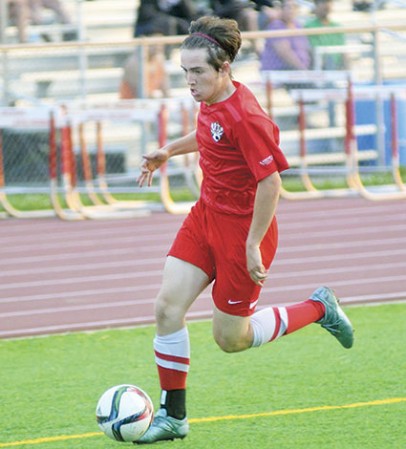 Matias Parada controls the ball during a home game for the Austin 17U soccer team this summer at Wescott Athletic Complex. Rocky Hulne/sports@austindailyherald.com

Kathy originally met Renato on a cruise when she was with her mother and he was traveling with a priest. She soon learned that life with Renato would be exciting as he was the life of the party and he would often do things spontaneously.

“Chileans always roll with it. They’re either sitting there drinking their tea or they’re running full speed ahead,” Kathy said. “Sometimes with my Midwest organizational skills it was driving me crazy, but it was always exciting. You never knew what you were doing before you would do it ever. He would say he was thinking about going to the beach and a few hours later we’d be packing up and headed to Mexico.”

Renato’s free spirit was certainly passed on to his children. Matias’ older brother Andres is moving to Los Angeles to pursue a music career, his brother Nicolas is hiking the Pacific Coast Trail this summer and his brother Renato lives in Portland.

Matias has been to about half of the states in the United States, and his family usually makes an annual trip to Chile. Last year, he showed a flair for trying new things when he finally tried hockey, despite only skating a few times and he also joined a golf team for the first time in his life.

“I was probably the only kid in Tuscon who cared about hockey,” Matias said. “I would always watch it and I always wanted to try it. This was the only place I could do it.”

Merritt, who is a forward and one of the top scorers on the Packer varsity hockey team, said he encouraged Matias to come out for hockey so he could at least get a chance to skate. Needless to say, Matias, who played on the JV hockey team, struggled to find his footing early on, which was a sharp contrast for an athlete who was always in control on the soccer field.

“I was playing hockey with guys from the soccer team who had seen me score goals and seen me really comfortable on the field,” Matias said. “Then they saw me on the ice and they saw me really, really suck. It was really fun and it was really cool. It was a neat experience.”

Merritt said that Matias, who plans on playing hockey again this winter, made big improvements throughout the winter.

Matias’ drive to play golf went a little deeper than his desire to play hockey. Growing up he had always played golf with his dad once every three months and he figured going out for the Packer varsity team would be a good way to remember his father.

Matias saw some time on varsity this past spring and he’s been playing a lot of golf this summer. He plans on working his way into the regular varsity lineup next season.

“When [my dad] passed away I missed golfing with him so I joined the team. I’ve enjoyed it and I’ve golfed almost every day this summer,” Matias said. “It’s been a little bit of a tribute to him from me.”

Matias will golf in a tourney dedicated to his father in Eau Galles, Arizona by the produce company that Renato used to run. If Matias learns Spanish, it is possible that he could eventually take over his father’s company. 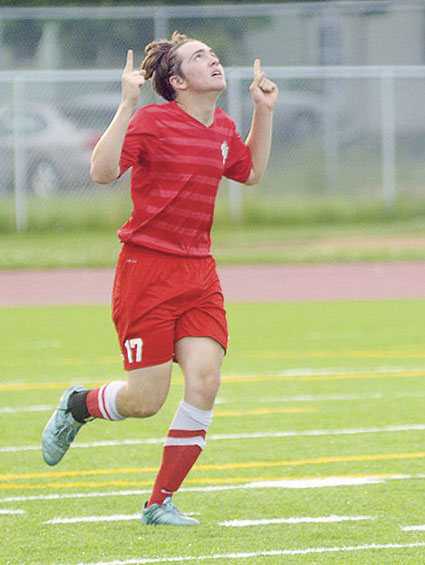 Matias Parada points to the sky after scoring a goal against Faribault at Wescott Athletic Complex this summer. Rocky Hulne/sports@austindailyherald.com

Standing out in soccer

When Matias was growing up, he longed to be a professional soccer player and recently he was interested in playing at the Division I level. But now he’s leaning more towards playing Division III soccer, so he can focus more on his education.

“I want to go through soccer happy rather than being really intense about it,” Matias said. “I want to play it and enjoy the game.”

That doesn’t mean that Matias doesn’t have big expectations for the Packers’ upcoming season. The Packer boys soccer team hasn’t been to the state tournament since 2009 and they were close last fall when they lost 1-0 to Rochester Lourdes in overtime in the Section 1A title game.

“I want the section final to be Lourdes against us again. I want to make that happen,” Matias said. “We lost a lot of seniors, but we’re realizing we’re going to have a pretty good team and we want to make the run for state.”

Austin head coach Jens Levisen said that he remembered Matias as a C squad player when he was a middle schooler and he was glad to see him on the team last fall. He considers Matias as one of the leaders on the team, who gives a lift in various ways.

“He’s definitely a very talented player,” Levisen said. “He’s very coachable. He had an experience from somewhere else and I encourage him to voice things that would be helpful for our players, but at the same time he’s very respectful of how we want to do things. He understands its for the betterment of the team.”

Merritt said that he loves playing soccer with Matias, who has a knack for creating offense out of the biggest jams.

“He could dribble through four people and have a goal for himself and he’ll pass it to you for a goal just because he wants to,” Merritt said. “On the field, he’s like another coach and he brings knowledge to the game that some of our coaches don’t even have. He’s helped me out tremendously.”

The Austin Greyhounds lost 10-3 to the Savage Outlaws on the road Wednesday. Grant Oldenburg took the loss on the... read more