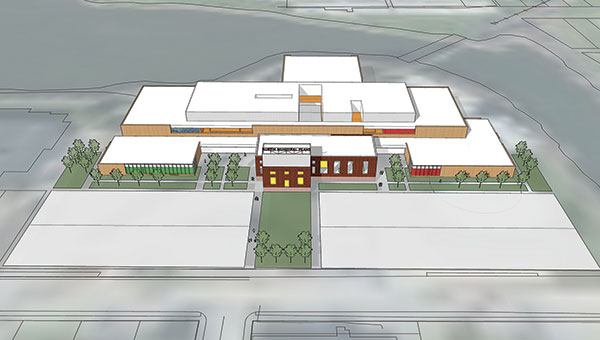 Early artist’s rendering of what the rec center could look like when completed. Photo provided

The city of Austin and the YMCA are heading back to the negotiating table on a major plan for Austin’s future.

The Austin YMCA’s board tabled agreements on the proposed $35 million Austin Community Recreation Center at a closed meeting Wednesday.

“We’re looking forward to a dialogue with city leaders and we hope we can reach an agreement,” YMCA Executive Director Tedd Maxfield said.

The Austin City Council voted 5-2 on June 6 to approve operating and purchase agreements for the Vision 2020 Community Recreation Center project that would build a rec center, which would be operated by the Y, at the downtown Austin Municipal Plant site.

While the city would own the rec center, the YMCA would operate the facility, which would feature a new YMCA and aquatic center along with public spaces like the indoor playground, the Youth Activity Center and some of the meeting rooms.

But the Y board still needs to approve the plans before anything can move forward.

Maxfield said the YMCA and city will continue negotiations, but he declined to comment on what issues caused the board to table the plan for more negotiations.

However, the YMCA and city officials were at odds over day pass costs and limitations for the rec center at previous Austin City Council and Vision 2020 meetings. The YMCA had proposed $12.50 day passes with unlimited uses but then negotiated that down to $8 day passes.

Maxfield said the city and YMCA can still reach a deal that best serves the community.

“The Y is hopeful that we can reach an agreement that satisfies both the city and the Y,” he said.