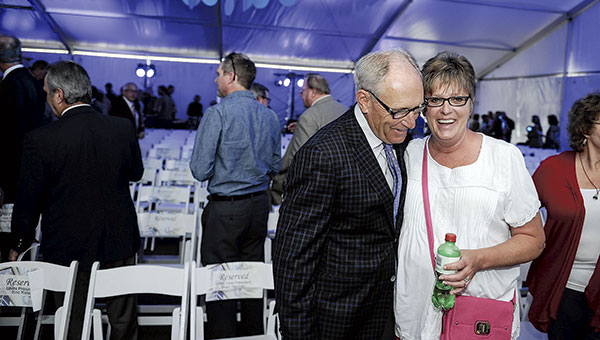 Hormel Foundation Chairman Gary Ray and his wife, Pat, were reticent for their names to denote their many contributions to parts of The Hormel Institute’s latest expansion, but Institute staff convinced them otherwise.

“We convinced them that not only was it a good idea, but that we needed their support,” Institute Director of Development and Public Relations Gail Dennison said. “So thank you very much.”

As the Institute unveiled its 20-lab expansion Wednesday, it also showcased the $4.5 million Ray Live Learning Center, a global communications area added to the expansion on the west side of The Hormel Institute.

It was designed to enhance Institute scientists’ ability to collaborate worldwide.

The space was named after a major donation given by the Rays.

The 250-seat auditorium provides state-of-the-art communications technology and a large multipurpose center outside the theater. The multipurpose area will be used for breakout sessions, dining tables for meetings and events like Business After Hours, which is hosted at the Institute annually to kick off Paint the Town Pink.

The Ray Live Learning Center will also provide a needed space for Institute staff to all meet in one location. Currently, The Institute staffs about 120, but that will grow to about 250 in future years.

“We don’t have a place to accommodate all our people and now we do,” Associate Director Ann Bode said.

The Institute did a trial run in the center last week to make sure it’s ready for the seventh China-U.S. Forum on Frontiers of Cancer Research and the fourth Hormel Institute International Cancer Research Conference, which kicked off Wednesday with about 150 scientists and runs through June 3. The 12th International Skin Carcinogenesis Conference is scheduled at the space for Sept. 21-24.

The Ray Live Learning Center was funded through $1.5 million gifts made by both The Hormel Foundation and University of Minnesota and another $1.7 million raised from the community. Donations came from individuals, businesses and organizations and exceeded the $1.5 million “Coming Together for the Cure” campaign goal by about $200,000.

A wall in the Ray Live Learning Center features a montage of The Institute’s history and accomplishments in cancer-prevention research.

“The sculpture is our way of highlighting the unique work of The Hormel Institute, in looking for natural compounds to prevent and treat cancer,” Pat said in a release. “This indeed is a gift of hope that answers to cancer will be found through the dedicated research of Institute scientists.”

The sculpture, designed by Steve Carpenter of Archetype Design in Minneapolis, reflects the research finding that the anticancer agent silybin, found in milk thistle, and its inhibitory effect on melanoma.

The sculpture represents the use of the Institute’s supercomputers as the technology that helped identify the potential target of milk thistle. It also features a protein that helps inhibit cancer.

“This is a good representation of The Institute trying to find ways to prevent and stop cancer using natural [compounds],” Dennison said.

This discover by a research team led by Dong was featured on the cover of the May 2013 edition of Cancer Prevention Research, a publication by the American Association for Cancer Research. It is a leading cancer research journal.

The Institute continues to look for natural compounds that play a role in preventing cancer.

The Institute also unveiled the $4.3 million cryo-electron microscope that will help scientists analyze the structure of proteins and amino acids. Institute scientists describe it as some of the most advanced microscope technology used in research today.

The east building expansion includes doctor/patient suite of rooms will allow The Hormel Institute to move from basic research into the next phase — translational cancer research. This will be the first time in The Institute’s 74-year history that it’s been able to conduct first stage clinical trials under its own management. They are planned to begin over the next one to two years.

In the past, The Institute has worked with Mayo Clinic and the Masonic Cancer Center on studies. For example, one study with Mayo Clinic investigated whether Aspirin can serve as a preventative for colon cancer or decrease certain markers.

“The answer is yes, there’s some real difference with taking Aspirin,” Bode said.

They’ll be able to test markers found in bodily fluids and some tissue samples, and The Institute plans to hire a doctor to head the section.