Poets and they know it; Students show off their rhyme skills during the Eberhart contest 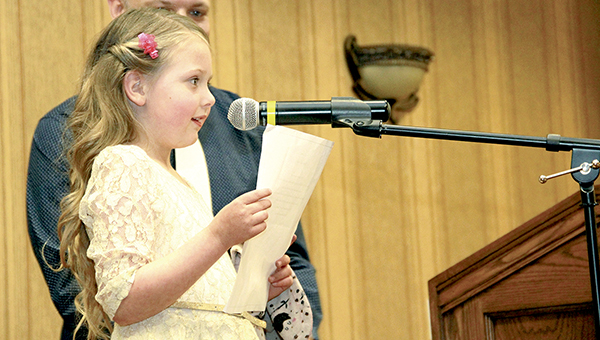 Emma Tharp of Woodson Kindergarten Center looks toward her parents in the audience and her grandmother, who watched via Skype, Monday at the Richard Eberhart “A Night With Our Poets” at the Hormel Historic Home.
Photos by Jason Schoonover/jason.schoonover@austindailyherald.com

Finalists of the annual Richard Eberhart Poetry Contest shared their poems Monday evening in the Hormel Historic Home during “A Night with our Poets.” Earlier this school year, students created an original poem to be submitted and reviewed for the contest. A panel of judges reviewed the submitted poems and announced the finalists at the end of March.

Emma’s grandmother — or Mimi — watched her read her poem via FaceTime from California. Emma’s mom Katie, dad Brandon and baby sister Nora were all able to attend the contest.

This is the 11th year of the poetry contest, which started in 2005. This was the second year it was held at the Historic Hormel Home.

“Sometimes having opportunities for our minds and our creativity to be demonstrated and showcased in this manner is a great opportunity for the kids to really show what they can do,” Gifted and Talented Coordinator David Wolff said.

“A Night with our Poets” is an event featuring the readings of the Eberhart Poetry Contest finalists from Austin Public Schools. The finalists from each building were invited to read their poem during the event. 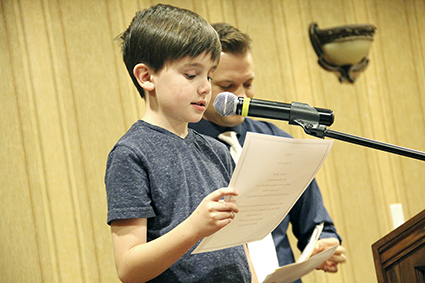 Max Larson of Southgate Elementary School reads his poem Monday at the Richard Eberhart “A Night with our Poets” at the Hormel Historic Home.

“They’re amazing,” Wolff said about the group of students. “Of course to hear it, their voices bring the magic to the poems, but the content of the poems are just very sophisticated.”

For Sophia Rippentrop, 8, the funny poems Shel Silverstein wrote were the inspiration for her poem, which dealt with the common cold and some common problems with snot.

Her mom, Gayette Grimm, helped her choose the poem to submit, and her parents, sister Sadie, and grandparents were able to make it to the contest.

Sophia recommended everyone submit something to the contest.

“I would say you should do it because then you have a shot as much as any others,” she said.

Kylie Larson, 18, entered her poem in the contest, and she is a senior this year. Her poem dealt with her last year in high school coming to a close, along with other important things in her life.

“Mostly because that’s how I felt this year,” she said. “It was kind of a wrap up of my year and my time in Austin.”

“Really it was about a lot of things that have happened in my life that I just decided, they need to be grouped together into one big general idea,” she added.

Kylie was shocked that she won, but said it’s nice. Her grandparents and a good friend were able to come.

“I like sharing my poems with people,” she said.

Wolff said competitions like this are good for the creative side in students.

“Taking risks is, I know, an important part of life, and to try something new and different, it’s hard to put your work on display and to be noticed by a judge,” he said. “It’s even harder for some of them to get up and read it in front of an audience. But trying something new, doing something that’s hard can really pay off too.”

Past years have featured a Minnesota poet, but this year students honored an adult in their lives who inspired them.

Richard Eberhart, who lived from 1904 to 2005, was a Pulitzer Prize-winning poet who emerged in the 1930’s as a modern stylist. Eberhart’s childhood started in Austin. The Eberhart Family donated the endowment funds necessary to generate the income for the annual contest awards.