Up and running; New Spam Museum opens doors to public 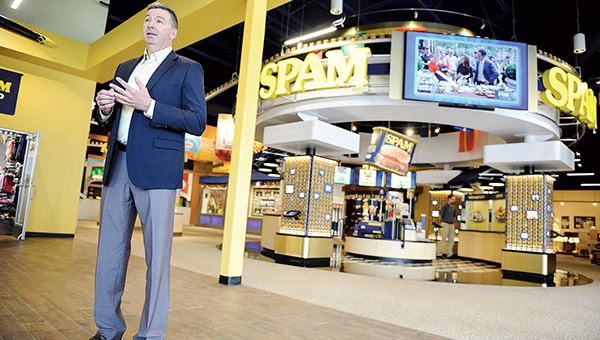 Austin’s biggest tourism destination is open and ready to serve up a trip around the globe, a look back at Spam in World War II, the history of Austin’s largest company, examples of how the famed canned meat is made, and plenty of fun to share — both in person and on social media.

Hormel’s new Spam Museum opened at 101 Third Ave. NE Friday at 10 a.m. with plenty of fun exhibits to explore and history to soak in.

Nicole Behne, Hormel’s marketing director for grocery products, said the company is excited to show off Spam, which has gained a place in American history and pop culture in its 79 years.

“We’re a brand that has been able to not only have a really great place in American history, but we are also … an icon in pop culture today,” Behne said. “So we’re super excited to share with you how we’re bring that brand experience to life.”

The museum will be open Monday through Saturday from 10 a.m. to 6 p.m. and Sundays from noon to 5 p.m., though Hormel may later look into the museum being open until 8 p.m. on Thursdays to give the Austin residents a chance to visit after work.

Here’s a rundown of what to expect when you visit the new museum. 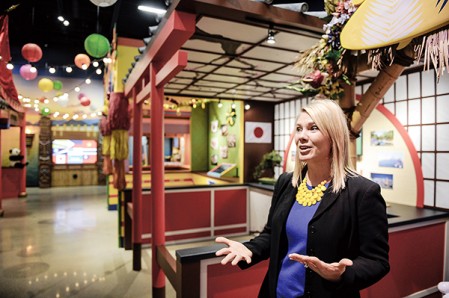 Nicole Behne, marketing director for grocery products for Hormel, talks about the World Market, new to the Spam Museum.

Can Central is “the heart of our museum,” Behne notes.

“This really about all things that make Spam fun and exciting today,” she said.

The circular area immediately just inside the museum features several displays of past Spam-themed items mixed in with touch screens and televisions.

The space includes a “sizzle reel” of the most recent up-to-date media clips. The touch screens will offer fans a chance to hunt recipes and simply email their favorite recipes to themselves. People can also share their Spam-stories and social media posts by tagging them #spammuseum, #spamstory and #spambrand.

“As you get a chance today to go through this new, interactive museum, you’ll see that all the great work done by so many great people has far exceeded any of our expectations,” Snee said.

The area also includes games and videos of community members sharing their Spam stories, along with Spam trivia. 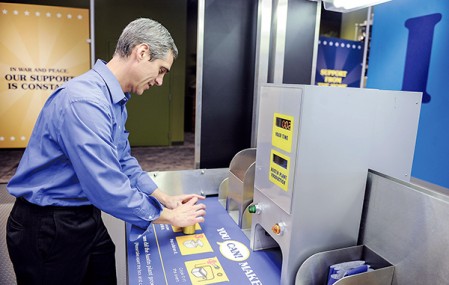 Rick Williamson, Hormel manager of external communications, tries his hand at packaging his own can of Spam Thursday afternoon at the new Spam Museum.

Visitors can take a trip around the world without leaving downtown Austin. The World Market features advertising, recipes and culture from around the globe to highlight Spam’s reach across 44 countries.

“We’re really trying to bring the flare of the global essence of the Spam brand into the museum,” Behne said.

The exhibit features a long hallway in the southeast corner of the museum with breakout spots and design with cultural flare from the United Kingdom, China, Japan, Latin America, the Philippines, South Korea and, of course, Hawaii.

“As we all know, Spam is very, very big in Hawaii,” Behne said.

Each booth contains a video or interactive component. The U.K. booth features an Angry Birds-like game, only it’s “Spamalot” themed where a knight catapults kitchen items like glasses and silverware to free cans of Spam for his kingdom.

In the Philippines area, visitors can create their own Jeepney — a Jeep-like vehicle popularly used for transportation in the Philippines. People can email themselves their finished products and see them cruising the streets of the game.

Then, there’s a world map at the end showing Hormel’s presence around the world.

One of the favorites from the old museum, the World War II-themed exhibit will be familiar to past visitors, along with some new surprises.

“This is a part of our history that we were able to pick up and basically just move into the new space,” Behne said.

The updated gallery includes literature and examples of Hormel’s support for the military from World War II to the present.

Visitors can again lift a crate of Spam that would have been shipped during World War II or watch a video of soldier talking about Spam.

“This takes us through the history,” Behne said. 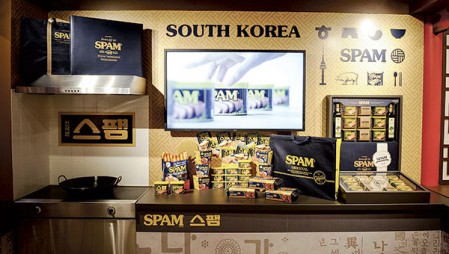 South Korea is part of the World Market, new to the Spam Museum’s new location.

Another returning favorite from the old museum allows visitors to assemble their own can of Spam and time themselves to best their friends and family. They fill the can with mock meat, bake it, and put a lid and label on it.

“It’s great because we can have four people competing against each other at the same time,” Behne said. “It’s a really fun, interactive component for kids and adults.”

The space also features a wall highlighting the 15 varieties of Spam and another wall that highlights the six key ingredients of the canned meat: pork and ham, salt, water, potato starch, sugar, and sodium nitrate.

“This is also on our website and something that we’re trying to let more and more and more people know about that Spam is a quality product and it just has six simple ingredients,” Behne said.

Then people can measure themselves in Spam cans, as Behne noted she’s 20 Spam cans tall. There’s also an I heart Spam wall for people to take pictures by. 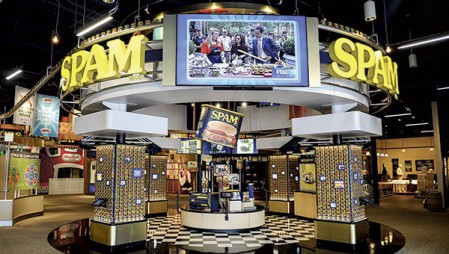 Can Central greets visitors to the new Spam Museum.

Hormel’s history also made the trek down Main Street to the new museum. This exhibit highlights Hormel founder George A. Hormel’s start in the meat-packing industry and Hormel’s start, along with information on how the business passed to his son, Jay C. Hormel.

“A lot of great history here about Austin and Hormel Foods,” Behne said, noting the exhibit includes some information on Hormel’s several brands.

This exhibit celebrates everything that makes Spam a pop culture icon from a statue of Sir Can-A-Lot to a display and video featuring Monty Python’s “Spamalot” — “things that have really helped to create awareness and fun with our brand,” as Behne said.

The area also includes historic posters from Spam and Hormel. 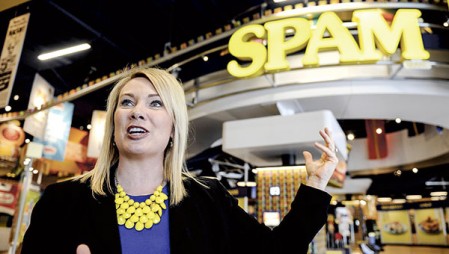 Nicole Behne, marketing director for grocery products, shows off the new Can Central that will greet visitors to the new Spam Museum. Photos by Eric Johnson/photodesk@austindailyherald.com

This display near the hormel brand shop features some highlights of the company, like a wall of the company’s many brands, information on The Hormel Institute, The Hormel Foundation, the Project Spammy initiative to fight hunger and more.

The brand shop features several sweatshirts, cook books, sunglasses, magnets and toys and many more items with ties to the company’s famed meat.

Austin has an indoor park.

A 950-square-foot area on the north side of the museum features a farm-themed play house and play structure, which also features a mural by Minneapolis artist Adam Turman.

“We all know in Austin, Minnesota, in the winter it can get real cold and this is going to give all the moms here and dads and families just a great place to bring their kids all year long,” Behne said.