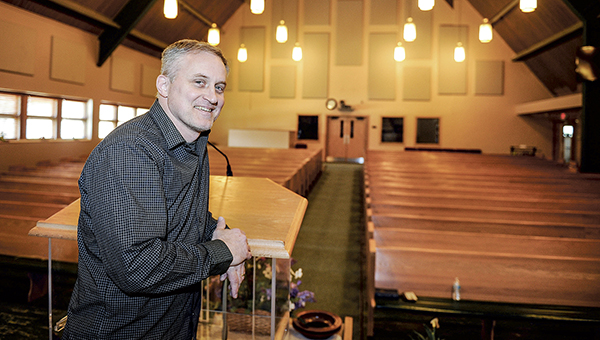 Pastor Devin Larsen is the new associate pastor for Grace Baptist Church and will work a lot with the youth of the church. — Photos by Eric Johnson/photodesk@austindailyherald.com

Becoming an associate pastor and getting involved in youth ministry fulfilled a life-long dream for Devin Larsen, who recently stepped into those positions at Grace Baptist Church.

“I’m blue collar,” he said.” I have been working in factories and driving truck all my life, and this is the first time I’ve taken a full time ministry position. And I intend to do it until I’m dead. That’s been my life goal for a long time.”

“It’s a nice change from standing at a break press or driving a semi to now ministering to people and sharing the gospel of Christ with people and touching lives that way,” he continued. “It’s a little more meaningful [to me].”

Larsen along with his wife, Jenny, and their five children started at the church Feb. 5. Larsen is the new associate and youth pastor at Grace Baptist. He and his family worked in ministry in Faribault before coming to Grace Baptist, but not as a full-time job. Before taking this position, Larsen operated a break press of Daikin in Owatonna, where he and his family still live.

“We have been in different leadership ministry positions in the past,” Larsen said. “In 2001, I graduated from Pillsbury Baptist Bible College in Owatonna, where we lived and continue to live, and that day [Grace Baptist Senior] Pastor Brett Williams down the hallway also graduated.”

Williams and Larsen had been in contact off and on through the years in youth ministry rolls and they caught up again at a meeting they both attended, where Williams asked if he would like to look into a position at Grace Baptist.

Larsen and his family knew some of the congregation through youth ministry, but he said it was nice to get to know them better before taking on the position.

“We knew a few people but it was definitely a good time getting to know each other better, and then they decided to include us in their church family at the end of January,” he said.

Larsen is excited to minister to people and follow God’s call for the rest of his career. Though he’s not nervous about the new position, he does want to ensure he is going about his job the way God wants him to.

“I always approach ministering for Christ with great respect in doing a good job, with doing what the Lord wants me to do,” he said.

Though the family plans to stay in Owatonna, Larsen isn’t worried about the drive, which was a concern before he took the position. 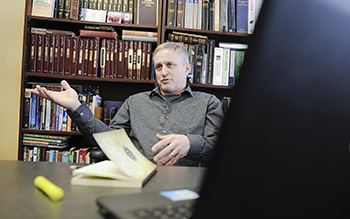 Pastor Devin Larsen talks about his path to being a pastor and coming to Austin in his office at Grace Baptist Church.

“When we were considering this as an option, the church was certainly concerned — we were a little concerned — about the distance from Owatonna to Austin,” he said. “But like I said, I’ve driven truck. So being behind the wheel, from my driveway to this driveway is 38 minutes, and that’s really nothing for me. So I like the wheel time.”

Larsen works a lot with the youth planning trips, vacation Bible school and more, but he also has some opportunities to speak to the congregation which he enjoys. He has also been very involved with visiting people who can’t make it out to church anymore.

“I’ve gotten to know a lot of the church family through the visiting program,” he said.

Larsen has found a lot of wisdom in the congregation and he said he is not only trying to help them grow, but they are helping him grow.

“I want to be faithful to the people,” he said. “I really want to spend the rest of my life serving the Lord and I can best do that serving his people.”

Get on a bike and ride; Respect, ridership will key Red Bike success

Jens Raffelson rolls one of the red bikes from the Red Bike program out of Rydjor Bike Shop earlier this... read more