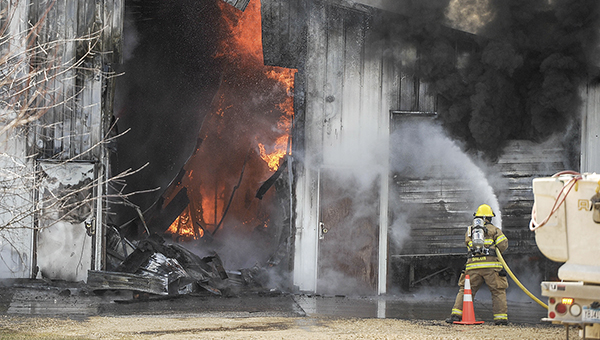 Flames rage inside a body shop as a firefighter puts water on the building in Grand Meadow Friday afternoon. Eric Johnson/photodesk@austindailyherald.com

Neighbors called the Grand Meadow Fire Department to the blaze at a body shop owned by Mark Monnier.

“Not sure what happened,” GM Fire Chief Ryan Gehling. “We got the call about 10 [minutes] after three. The building was fully engulfed.” 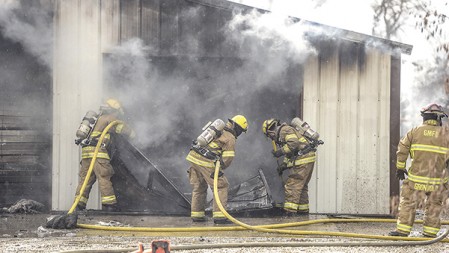 Firefighters tear away a door on a body shop to get at flames Friday afternoon in Grand Meadow. Eric Johnson/photodesk@austindailyherald.com

The building was a total loss. Firefighters were able to get a few vehicles out of the building, but some were believed to be inside and lost to the fire.

The fire was put out around 5:30 p.m., and a fire inspector was called to the scene.

The building was next to Baudoin Oil Co., and firefighters were working to ensure the stored oil didn’t catch on fire.

CORRECTION: A former version of this story incorrectly said the fire was at a building owned by Baudoin Oil Co. The Herald regrets the error. 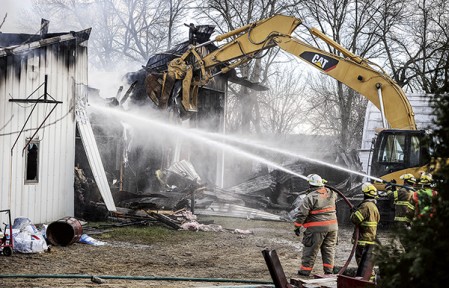 An excavator pulls away a portion of a wall as firefighters put water on a bodyshop in Grand Meadow Friday afternoon. Eric Johnson/photodesk@austindailyherald.com