Get on a bike and ride; Respect, ridership will key Red Bike success 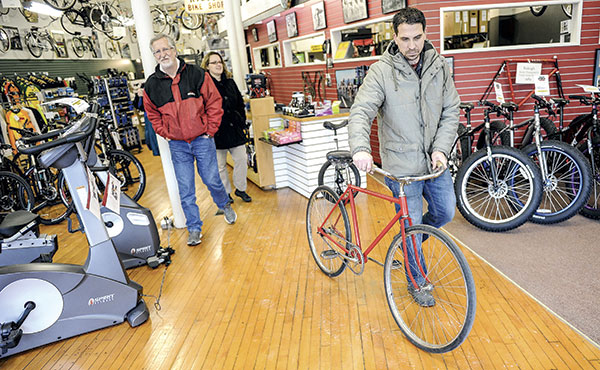 Jens Raffelson rolls one of the red bikes from the Red Bike program out of Rydjor Bike Shop earlier this year. Eric Johnson/photodesk@austindailyherald.com

At its core, Austin’s new Red Bike program is that simple: People pick up one of 30 bikes from six racks around town, they use the bike and then they return the bike.

“The bikes will be free for anyone to use,” Vision 2020 Bike/Walk Committee Chairman Steve Kime said. “We want that to be clear: free to use. Ride them as much as you want. Take care of them.”

After Austin shakes off winter’s grip, the community typically sees a barrage of bicyclists hit the streets. Community leaders are hoping to see many more pedaling around Austin on Red Bikes.

Vision 2020 and the city of Austin are partnering to kick off the Red Bike sharing program this year to offer free bikes for people to use around town, whether they live in Austin or are just visiting.

But us Midwestern folks can be hesitant to try new things, especially when it involves taking something. So here is everything you should know about taking advantage of Red Bike before the program debuts in mid-April:

How can you ride?

Red Bikes will be easily identifiable. The one-speed bikes will be painted red and will be stationed at various red racks at six spots around town.

“It’s for everyone to use. They’re free,” Kime said. “Take advantage of it and just make it a positive experience in terms of riding them as much as you want. Take care of them and when you’re done, put them back in a red rack.”

All the bikes are on adult frames with a mix of men’s and women’s bikes. At least some of the red bikes should have baskets to help people who want to use them to go shopping.

The racks will also be identified with a Red Bike sign along with rules for ridership.

So how do you use Red Bike?

•Step 2. Adjust the seat to your preferred height.

•Step 5. Depart to your destination and follow the rules of the road.

•Step 6. Return to a red rack when you’re done.

When can you ride?

Red Bike will debut in mid-April each spring, weather permitting, and run through mid-October.

The bikes won’t be out in the winter, and organizers ask riders not use the bikes at night.

How can you help?

The “respect” part of Red Bike’s motto is broad, but most of it is based on common sense.

Kime urged riders to only take a bike from a red rack and not from other places should someone borrow a bike and leave it outside a store. However, if a bike looks out of place or is left in the same place for several days, people can call Austin Parks & Recreation at 507-433-1881. 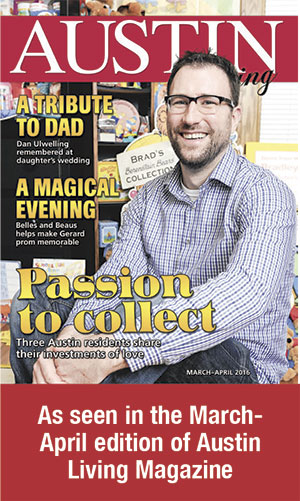 While police have been involved in Red Bike’s development, Kime expects the community to be the eyes and the ears, as they’ll help keep an eye out to see if anything is out of place.

When Willmar started a similar program, it lost about 20 percent of its bikes; however, Austin’s goal is to lose no bikes. Kime hopes Austin riders will be respectful of the bikes after the positive response from the community.

“We’ll see them out and about and that will be the best indicator, I think, is we see people riding them,” Kime said.

Kime and other volunteers will work to ensure bikes are evenly dispersed at the racks, and will help ensure the bikes are maintained. If a tire is low or if a bike has some other issue, there is a fixit station by Morning Lions Park, 198 Eighth St. NE, which is one of the rack locations.

Where are the red bikes?

The initial six Red Bike racks, which are subject to change and may be adjusted as the program gets under way, include:

• Noon Lions pavilion on Oakland Avenue, south side of the road

• Parking lot off of First Street Northeast, east of the Spam Museum

By Greg Siems Vision 2020 Director It can be hard to keep track of all the action happening in St.... read more