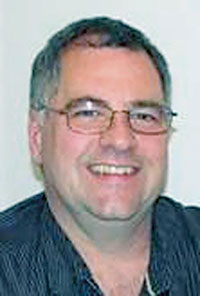 Chris grew up in Rochester and graduated from John Marshall High School and from Austin Community College. He was united in marriage with Jan Harding on May 17, 1986, in Altoona, Iowa. Chris was a software engineer for Businessolver Inc. in West Des Moines, Iowa.

Chris shared his smile and laughter with everyone he met. He enjoyed bicycling and was very active in the RAGBRAI community, including heading Team Virtual RAGBRAI for many years. He was an amateur radio operator and also produced broadcasts for various high school basketball and football teams, and had a special place in his heart for Woodward Academy Knights.

He was preceded in death by his father, Kenneth Charron.