Better than the lottery: Couple comes home to emotional reveal of rennovations 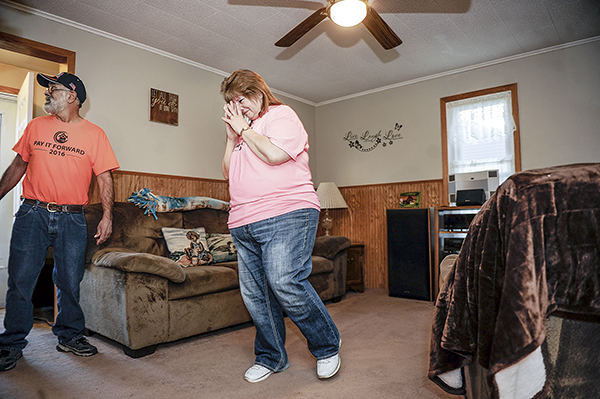 Becky Josephson is moved to tears after getting her first look at the inside of their renovated home with husband Gary thanks to T ‘N G Plumbing’s Pay it Forward program. Eric Johnson/photodesk@austindailyherald.com

Becky and Gary Josephson tiptoed into their newly painted living room with wide and tearful eyes on Friday evening when they got to see the final results of Pay It Forward’s makeover.

Not only did they hardly recognize their living room, but their bedroom and kitchen had newly painted walls, a laminate wood kitchen floor and new ceiling fan. 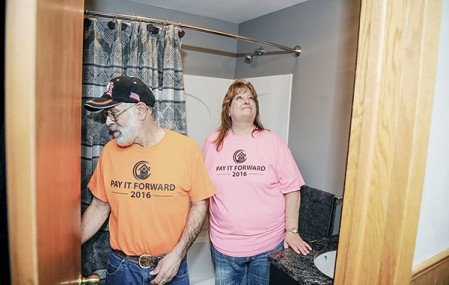 “Unbelievable,” Gary said, turning around the room. “It smells like a brand new home.”

The big gesture was the reveal of the bathroom. The mold was gone and new fixtures took their place, including lights, countertop, bathtub, toilet and everything else from top to bottom.

“I can’t begin to say thank you,” Becky said, wiping away tears. “It’s better than winning the lottery.”

The project was completed in just one week. Holiday Inn of Austin donated the room for Becky and Gary to stay in while their home was being remodeled. In addition to a remodel, T ‘N G Plumbing also installed a water softener, which will help with Becky’s polycystic kidney disease because it makes her skin dry and itchy.

She recently found out her creatinine levels rose, which is not ideal for her. Her doctor wanted to start the next step but Becky wanted to wait until the remodel was done.

“I think they [doctors] will let me do dialysis out of my home now,” Becky said. “I’m 100 percent confident they will let me now. The next step is a kidney.”

Gina Grundmeier, co-owner of T ‘N G Plumbing, said she was super excited for the Josephson’s and proud of the work that was done. 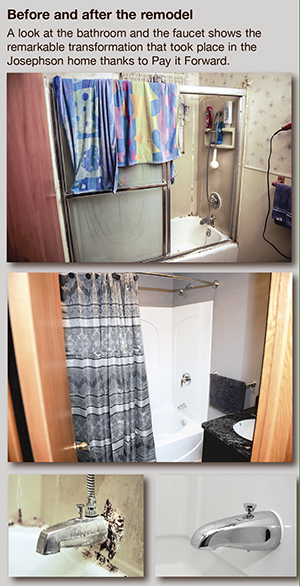 “We know in our hearts this was where we needed to be,” Grundmeier said. “Becky and Gary are so humble.”

They also brought on a new volunteer for the project. Jason Culbert of Jason Culbert Ceramics put in the flooring in the bathroom and kitchen. He said he’s heard about the last two projects from Gina and Todd and decided to jump on this project and hopes to work with them on future projects.

“It warms my heart to give back,” Culbert said. “The process was great.”

Becky and Gary have a family home with one bathroom, which sees a lot of traffic from visitors including two children and their spouses, and three grandchildren.

They have lived in their house since September 1988, but the main problem was the mold in their bathroom.

Becky was diagnosed three years ago with polycystic kidney disease, a disease in which abnormal cysts develop and grow on the kidneys and can become large and painful. She has been on a kidney transplant list for about a year, a list that tends to have a five-year wait.

The disease is hereditary, but Becky and her sister did not know they had the disease until their mother passed away. Her sister was diagnosed with it and told Becky she had better go to the doctor and get checked.

Finding donors is difficult for Becky and her sister because her parents were only children, so there are no aunts or uncles or cousins to help her out.

A friend donated a kidney to Becky’s sister, who is doing well after a successful transplant.

“I just keep praying that that will soon be the case for me as well,” Becky said. “It’s been tough.” 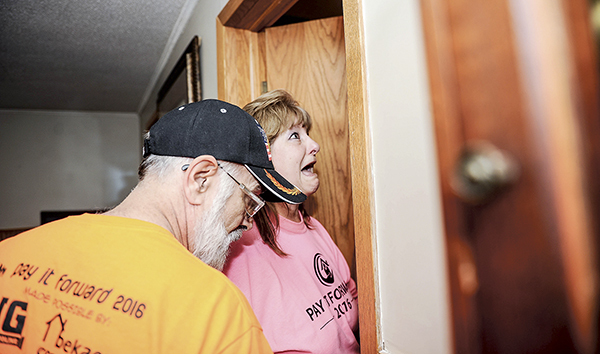 There were two possible donors that matched Becky’s blood type, but neither passed the required two-day evaluation.

This was taken into consideration when they were nominated for Pay It Forward, according to Grundmeier.

“The next thing is with her creatinine levels increasing, whether it’s the dialysis she has to start or, you know, when she does get to the point with the transplant. And one of the things in older houses with the bathrooms and ventilation is where you get the mold and stuff. And that is crucial to not have, especially when you’re trying to heal from such a major surgery,” Grundmeier said.

Becky said she couldn’t describe how she felt when she found out they were this year’s recipients.

Gary is also unable to work due to arthritis in his hands.

This month marks their fifth year of business for the Dexter-based T ‘N G Plumbing. The business was named the Austin Area Chamber of Commerce Business of the Year last year, and they were awarded Best of Mower County Plumber in July of 2014 and 2015.

“My husband and I were just blown away, because we had just been in business for two years and we were like flabbergasted, that was so incredible,” Grundmeier said. “We don’t succeed without everybody else. So we wanted to find a way … how do you pay back a community that puts that kind of faith in you?”

Seeking a way to give back, the Grundmeier’s formed Pay It Forward.

Grundmeier said one of the most neglected rooms in a house can be a bathroom, because it’s not the main focal point and remodels can be costly.

“I just thought, well there’s got to be people out there that need it, that would never ask for it, but [other] people can share a story of why this person [needs it]…and it just kind of went from there,” Grundmeier said. 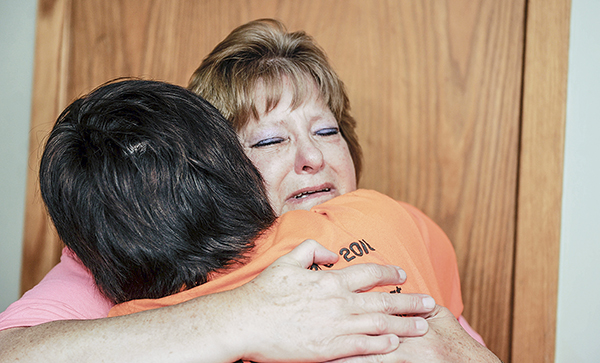 Families are nominated for the remodel through an essay contest. Becky and Gary were nominated by their son, Dustin, and his wife, Megan.

“Basically, once she gets a kidney transplant, she’s not going to be able to be around that mold and stuff,” Megan said.

The program requires recipients to own their home, and someone must write an essay explaining why the family should get the makeover and submit it with photos of the bathroom. There is no word count requirement, just whatever it takes to tell the family’s story.

Becky said she would love to be a part of Pay It Forward.

“It’s huge. There’s so many emotions and all the hard work,” Becky said. “It’s phenomenal.”

Flattery on stage at Paramount