An eye on waterways; SWCD still has buffer work to do as county hits 94 percent in compliance 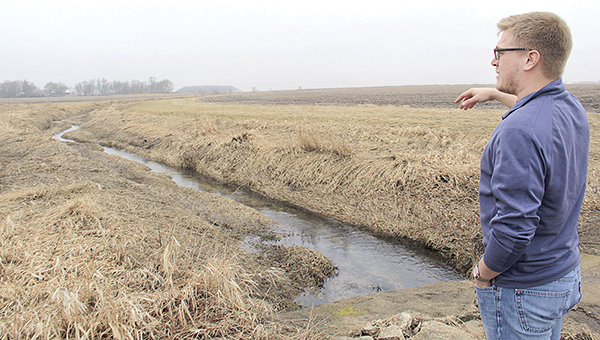 Aaron Gamm of the Mower County Soil & Water Conservation District points at land along Dobbins Creek just off 610th Avenue in Red Rock Township southeast of Brownsdale on Monday. Though an estimated 94 percent of Mower County is in compliance for a buffer law passed last year, SWCD staff will be contacting landowners about non-compliant land in the coming months along with options for how they can correct it. Photo by Jason Schoonover/jason.schoonover@austindailyherald.com

Aaron Gamm pointed at a mowed grassy area running from a field to dried, pushed down grasses that finally dipped into the waters of Dobbins Creek just southeast of Brownsdale Monday.

“This is the perfect example of a buffer right here,” said Gamm, the district technician with the Mower Soil & Water Conservation District. “That’s basically 50 feet on the dot.”

Gamm, the county’s lead on the state buffer plan, and the SWCD are in the early stages of helping Mower County get in compliance with Minnesota’s 50-foot buffer requirement along public waterways, including the Cedar River.

The district got some good news recently: The vast majority of Mower County’s agricultural land already complies with the 2015 law seeking to establish buffers and water-quality practices to protect waters from erosion and runoff pollution; stabilize soils, shores and banks; and provide habitat and riparian corridors.

Mapping by the SWCD has confirmed that 94.4 percent of the county’s farmland already satisfies the new Minnesota buffer rules. Nearly 100 percent of public ditches in the county also meet the state’s 16.5-foot buffer requirement. 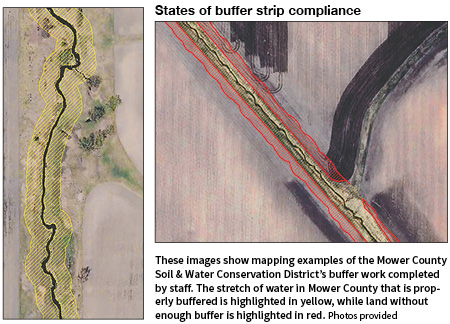 “A vast majority of Mower County’s farmers and ag landowners have been proactive on buffers over the years and great for our SWCD staff to work with on an array of field practices that reduce and filter stormwater runoff,” Mower SWCD Manager Justin Hanson said in a press release. “We appreciate their efforts and look forward to working soon with the others who mostly need to buffer small tracts of land.”

Overall, Mower County has 445 miles of public waterways, including 21 miles of public ditches, with about 280 acres not in compliance with the buffer law, according to the SWCD.

Once all is in compliance, about 5,223 acres will be buffered in Mower. In the Cedar River Watershed District’s portion in Mower County — nearly 234 miles of public waterways — about 95 percent are properly buffered.

The first step is to let landowners know whether they’re in compliance before working on a plan to get them into compliance. SWCD staff will contact landowners about non-compliant land in the coming months along with options for how they can correct it.

A buffer is just perennial vegetation that’s not tilled, and some farmers use it for hay, though it can’t be used as set aside land if it’s used for hay.

Gamm admits there has been a lot of rumor and worry surrounding the buffer requirements, but the SWCD is hoping education can assuage those fears.

“Once I’ve sat down with a few [people] and really kind of gone in-depth about what’s actually required … it’s been a positive response,” Gamm said.

Statewide, the law seeks to establish 110,000 acres of vegetative buffers of up to 50 feet along lakes, rivers, streams and ditches to help filter out phosphorus, nitrogen and sediment. The buffer width will be an average of 50 feet on public waters and at least 16.5 feet on public ditches. Private ditches no longer are required to be buffered.

Mower SWCD and all other SWCDs in Minnesota are implementing the state’s buffer requirement, through planning; providing technical assistance to landowners; reviewing alternative practices for approval; and tracking and reporting progress. By July, the Minnesota Department of Natural Resources expects to finalize buffer protection maps.

During recent years of higher crop prices, Hanson said, incentives offered by the Cedar River Watershed District and Turtle Creek Watershed District — both managed by Mower SWCD staff — helped keep a lot of expiring Conservation Reserve Program (CRP) farmland enrolled and, in turn, buffer in place along waterways. In 2015, the number of Mower County CRP buffers and wetland enrollments increased to 2,474 acres compared to 175 acres in 2014. 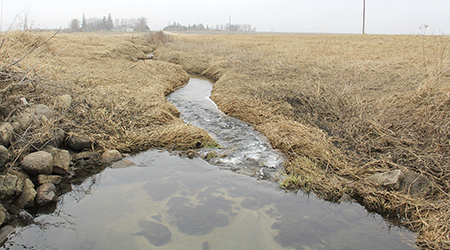 Dobbins Creek waters flow north along 610th Avenue in Red Rock Township southeast of Brownsdale. SWCD staff will be contacting landowners about non-compliant land in the coming months along with options for how they can correct it. Photo by Jason Schoonover/jason.schoonover@austindailyherald.com

Under the federal CRP land conservation program, farmers sign contracts for 10 to 15 years to remove environmentally sensitive land from farm production and to plant species to improve environmental health and quality.

Staff at Mower SWCD have been working to educate the ag community and general public on the state buffer plan, including presentations at events organized by the Mower County Farm Bureau and Austin Izaak Walton League.

Buffers provide a lot of benefit for water quality as well as for flood control and habitat opportunities, Hanson said, but they aren’t going to solve the issues with the state’s waterways on their own.

“Our staff continues to work with farmers and rural landowners on many other types of projects — including cover crops, stormwater detention and saturated buffers — that reduce runoff and improve water quality,” Hanson said in a release.

For more buffer information, go online to www.dnr.state.mn.us/index.html and www.bwsr.state.mn.us/buffers. Questions also can be directed to Gamm at 507-434-2603.

•234 miles are in Cedar River Watershed

A 23-year-old Austin man has been charged with selling heroin to a 23-year-old man who died of an alleged overdose... read more