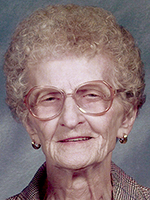 Alta was born on Jan. 29, 1928, in Austin, Minnesota, to Conrad and Veta (Pope) Myhre. She graduated from Lyle High School in 1947. Alta married Norman G. Farlinger on Oct. 21, 1947, at Our Saviors Lutheran Church in Lyle. Together they had three children and farmed in the Lyle area until 1955 when they moved into town. Norman G. passed away in 1969 and Alta began working for the Lyle School as a cook for the next six years. Alta married Norman L. Joynes on Aug. 10, 1974, in Rochester, Minnesota. They moved to Albert Lea in 1975 where Alta worked as a baker for a local café. Alta loved to bake pies, cakes and cookies; it didn’t matter what she baked, it was always good! Later in their retirement, Alta and Norman L. moved to Austin.

She was a member Our Saviors Lutheran Church in Lyle and volunteered with the “Willing Workers” for Woodbury Cemetery.

A graveside service will be held at 1:30 p.m. on Monday, March 28, 2016, at Woodbury Cemetery with the Rev. Scott Meyer officiating. There will be a lunch and reception at Our Saviors Lutheran Church in Lyle following the interment service. Clasen-Jordan Mortuary is in charge of arrangements.