Pink rakes in the green; Bruins top record with $35K at cancer fundraiser 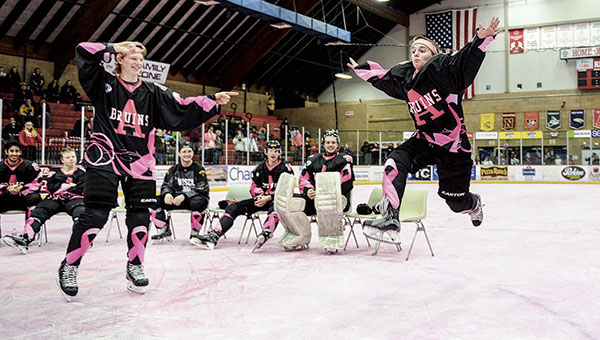 Logan Haskins, right, jumps through the air as he performs a routine with teammate Michael Piehler during the Paint the Rink Pink jersey auction Saturday night. Photos by Eric Johnson/photodesk@austindailyherald.com

The Austin Bruins painted the rink pink and then raked in the green Saturday.

The Bruins hosted the team’s sixth annual Paint the Rink Pink game and auction in Riverside Arena and broke the team’s own record by raising more than $35,000.

“This is the biggest Paint The Rink Pink we’ve ever had,” Bruins co-owner Craig Patrick said.

“It went great, we had a sell out crowd,” he added. 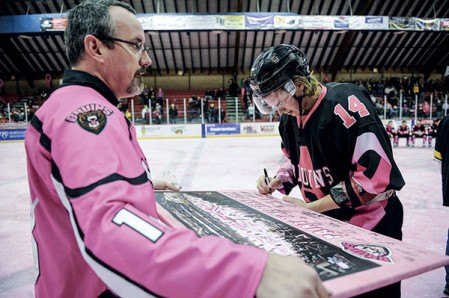 The Bruins’ Jan Stefka signs a picture that was to be auctioned during the jersey auction at Paint the Rink Pink Saturday night at Riverside Arena.

Paint the Rink Pink started six years ago and morphed into Paint the Town Pink the following year. The Bruins have since raised more than $150,000, and the team raised more $26,000 last year. The players hosted the usual jersey auction and performed individual skits and routines after the game. One pair of players skated to Blades of Glory, and another pair did a slightly more risqué “Magic Mike” routine, which Patrick said was very popular and funny.

Patrick said every year the coaches and leaders talk to the players and explain why it’s so important to humble and embarrass themselves to raise money for the cause of fighting cancer.

“None of them want to do it [at first], they’re all super embarrassed, but then they do it and then you can’t get them off that spotlight,” Patrick laughed.

“The guys had a really great time,” he added. 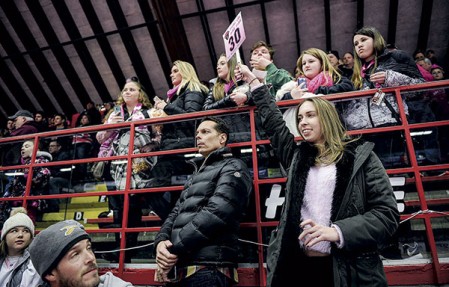 Alana Beck competes for her twin brother Ian Beck’s jersey during the jersey auction Saturday night during Paint the Rink Pink at Riverside Arena. With her is their dad Bob Beck. Eric Johnson/photodesk@austindailyherald.com

One of the highest items to sell was Zach Kennedy’s No. 25 jersey, which was auctioned off for about $3,700.

Since the event started in 2010, Patrick said it has grown immensely, and he thanked the community for helping one event grow into an entire town fundraiser.

“It almost makes you tear up when you think about it, because we started with the one event in 2010 — just Paint The Rink Pink — and then to have it evolve into what it is now, it’s just mind-blowing.”

Though the Bruins lost the game to Coulee Region 4-3, it didn’t impact the crowd’s excitement for the post-game auction and event. Patrick said this year saw the largest crowd of people who stayed for the fundraiser. Though he doesn’t know why there were so many more people, he hopes to keep it going in the future, whether it’s with returning fans or new fans.

“Hopefully people that are new to it will help pick up the torch and keep it going next year,” he said. 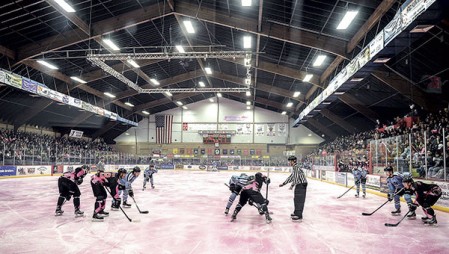 The game was also featured on Fox Sports North on the post game broadcast for the Minnesota Wild’s game Saturday night.

Patrick and other leaders were happy to again partner with The Hormel Institute, Gail Dennison and Kathy Finley. Patrick also thanked his fellow co-owner Mike Cooper and all the Bruins’ staff members.

“We couldn’t be prouder to be in any city,” Patrick said. “Austin is great for the Austin Bruins, our players love to be here, we love to be here, and it may sound like a cliche but we really do have the best fans in the league.”