Hormel skipping ahead on growth plans 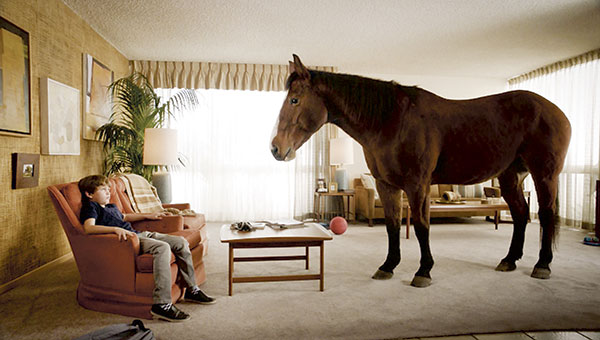 A still from a recent commercial for for Skippy P.B. Bites. Photo provided by Hormel Foods Corps

A boy plops down in a chair, presumably after a long day of school, and says, “I’m so hungry I could eat a horse.” The boy looks up to see a horse in his living room, and the animal promptly offers him a different snack option: Skippy P.B. Bites.

Hormel Foods acquired Skippy in 2013 for about $700 million, making it one of the largest acquisitions in the company’s history along with Applegate Farms for $775, Wholly Guacamole for about $140 million and CytoSports Holdings for $450 million.

Soon after the acquisition, Hormel CEO Jeffrey Ettinger challenged the Skippy brand team to take peanut butter out of the jar, according to Skippy brand manager Mike Guanella.

“Early on we identified that peanut butter’s great for snacking and very quickly came up with the idea of portable peanut butter,” Guanella said.

Though peanut butter can be sticky and hard to transport, Hormel and Skippy wanted to capitalize on the product’s standing as a snacking staple.

That’s where P.B. Bites, which come in pretzel and double peanut butter flavors, came in. 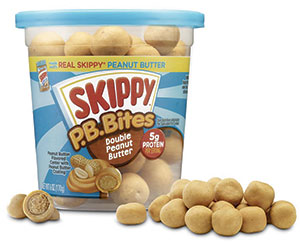 “We recognize the growing demand for single-portion, portable snacks and the role that peanut butter plays in the snacking world,” Guanella said in a press release. “As a convenient, fun and nutritious snack option, Skippy P.B. Bites were created to meet this demand and satisfy the snacking needs of peanut butter-loving consumers, anywhere, anytime.”

Guanella said the test markets showed success; in fact, the response was positive enough to inspire the company to move up the national launch.

“They immediately were like, ‘That’s great. Can I get some more please?’” Guanella said.

“Not only did people really enjoy the product, but they were more than willing to share it on social media as well,” Guanella said.

The bites launched nationally in September 2015.

The company, as shown by the television advertisement with the boy and the horse, tried to capitalize on the moment when a child gets home from school: They’re famished or — as the company’s creative team said — hungry enough to eat a horse. Or another way the creative team is describing it: being “hangry,” a combination of hungry and angry.

Hormel is pushing that the P.B. Bites are great snacks to give kids, and the company even tested the products with some Austin Public Schools students last year.

The new product is one that also highlights Hormel’s growth and tactics in recent years.

“A lot of our efforts, not only in new product development but also for our existing portfolio, is making sure that if we want to continue to grow our business or our products that they’re kind of around those four themes so we’re making sure that we’re connecting with consumers that are looking for these more and more,” said Rick Williamson, manager of external communications.

During last week’s first quarter conference call, Hormel President James Snee said in last week’s conference call that when the company acquired Skippy, they knew were confident they could grow the brand through advertising and innovation, which they’re doing through the P.B. Bites.

“We believe that there’re still many opportunities to grow and innovate with this iconic brand,” Snee said.

Snee added the company is looking for similar growth for CytoSports and its Muscle Milk brand, which added new items like the Pro Series and organic products.

But it might be just the beginning for the Skippy P.B. Bites. Guanella said they’re exploring new flavors of items that traditionally pair well with peanut butter, and he noted new flavors could debut later this year. The company is also exploring different packaging options for their on-the-go offerings.

They currently have pretzel and double peanut butter flavors.

The company is still building additional stores, but Guanella said they’re now readily available in most supermarkets and convenience stores nationwide in the peanut butter aisle with a suggested retail price of $2.89 to $3.19.

The Austin Public Schools Board outlined transparency with the board, special education collaboration and generationally diverse teachers as advantages for... read more