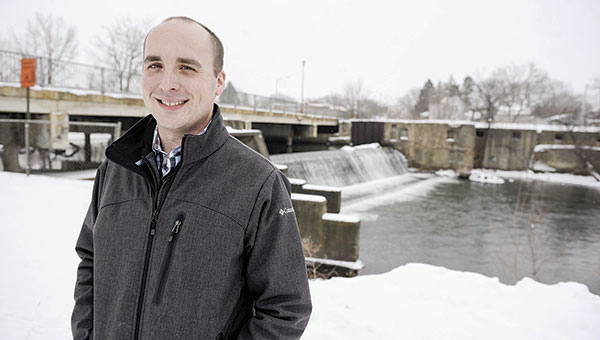 Tim Ruzek stands next to the Fourth Avenue NE bridge. Ruzek, who was previously with The Hormel Institute has now been hired by the Mower County Soil and Water Conservation District and Cedar River Watershed District. Eric Johnson/photodesk@austindailyherald.com

A familiar face will help take efforts to restore Mower County’s waterways and explain them to the public.

He’s ready to continue helping the joint SWCD and CRWD office “revive our river,” as its motto goes.

“That’s what we’re doing in every aspect,” Ruzek said. “It’s a great natural resource. The Cedar River specifically, though other waterways are great as well.”

One of Ruzek’s chief duties will be to represent the office and be a voice that can connect with the public, something he’s already done through contracting part-time as the public outreach coordinator since 2010.

“He’s already shown this,” District Manager Justin Hanson said. “We’ve got five years experience of him taking our work and what we’re trying to tell the public and then he translates it in a way that people who don’t do this kind of work everyday can understand. That’s such an incredible value to us.”

When Hanson and his staff were looking to fill an open position, they recognized a gap in the office. Hanson praised the technical skill of his staff, but noted they didn’t have someone who can communicate the work they accomplish.

“A big part of our obligation to the public is to be able to communicate with them the projects that we’re working on and show them what they’re getting for their taxpayer dollars,” Hanson said.

Ruzek fit that skill set perfectly with his background as a Post-Bulletin reporter from 2003 to 2010 and most recently as a communications representative for The Hormel Institute since 2010.

“He’s going to be great in that role,” Hanson said. “He has a connection to the community. I don’t think you can overstate the connection and contacts and the understanding that Tim has for Austin and Mower County.”

While Ruzek has spent his first days with the SWCD office getting acclimated and learning more about about day-to-day duties in the office, he’s no stranger to the field. He’s served on Vision 2020’s Waterways Committee since its inception, most recently as co-chair.

“His passion for water resources can’t be matched,” Hanson said.

Ruzek is an Austin native and a 1999 Austin High School graduate, and he continues to volunteer with Vision 2020 and the AHS Alumni Association. He went on to graduate in 2003 from the University of Wisconsin-Eau Claire. He and his wife, Heather, live in Austin with their two daughters: Aubrey, 6, and Estelle, 2.

“Because of his local knowledge and local understanding, he’s a perfect fit for what we’re trying to do,” Hanson said. “We’re very, very local and having the local connection has always been important, and Tim’s just going to take that to the next level.”

The SWCD office’s key goals focus on reducing flooding and improving water quality, but it’s also about reviving the community’s connection to the river as a natural resource. That’s why in recent years plans have focused on improving recreation on the waterways.

“[It’s] just raising awareness that this is a great river to hop on a canoe or kayak and go down, go explore,” Ruzek said.

Ruzek, who enjoys canoeing, says that’s already happened in recent years as the office started an adopt a river program, helped get the Cedar River designated as a state water trail, and oversaw efforts to remove more than a thousand tires and other debris from the river.

In recent years, Ruzek has used his interest in waterways history to highlight past river recreation in Mower County through programs at the Hormel Historic Home and Austin Public Library.

“For many years, that was a real recreational destination, whether it was downtown or at Roosevelt Bridge or up at the Ramsey Mill Pond,” Ruzek said.

Carving out a role

The water planner position dates to the 1980s in Mower County and a primary goal is to ensure the community water plan is being accomplished. However, Hanson noted that Ruzek now has the chance to learn in the office, carve out his own role and take ownership of his efforts.

His communication skills are coming to the office on the cusp of a busy time. As the watershed district approaches changes, Hanson said it’s never been more important to have someone ensuring they’re communicating with the public.

Not only with the SWCD office be tasked with leading the charge to implement Gov. Mark Dayton’s buffer strip initiative to add buffer strips along waterways, but the office is also working with Vision 2020 and the city on future projects.

The city of Austin is seeking $600,000 for the Fourth Avenue Northeast Dam area for flood control retaining walls, restoring the old mill site, for stream bank restorations and to study dam conditions. And it’s seeking $3 million in state bonding dollars for the Ramsey Dam area and Ramsey Mill Pond near The Old Mill Restaurant to acquire more land, build two miles of trail, restore a railroad bridge, improve the dam and build public amenities to improve the area.

While Ruzek is excited for the new opportunities with the SWCD office, the job meant leaving The Hormel Institute.

Ruzek said he enjoyed his time at The Institute and appreciate the support he received there.

“Personally for me, that was an important job as far as helping to raise awareness and fundraise for cancer research,” Ruzek said.

He called The Institute’s cancer research an outstanding cause, and he continues to serve on the Paint the Town Pink Committee and will continue supporting The Institute.

However, he’s still excited for to work with area waterways.

“It was definitely a difficult decision, at the same rate though, a decision that I felt really good about because again I’ve been able to work with Justin real closely and the rest of the staff at CRWD, SWCD office,” Hanson said.

McDermott stepping down; I.J. Holton’s only principal to retire at end of school year

I.J. Holton Intermediate School principal Jean McDermott shows off the office area during a tour for media in May of... read more