Murray and Gach lead No. 4 Packers past No. 10 Raiders 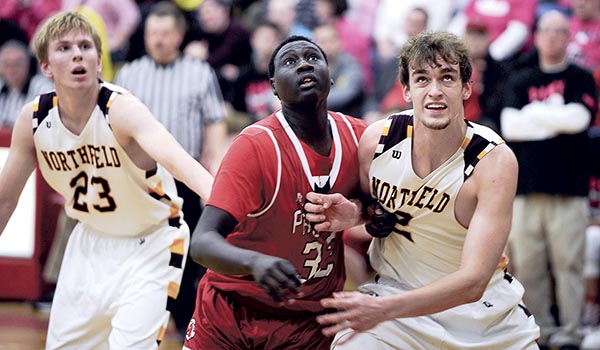 The Packer boys basketball team leaned on two of its emerging scorers as it was able to rally past No. 10 ranked Northfield and walk away with an 80-71 win in Packer Gym Friday.

Although neither of them played any meaningful varsity minutes last season, senior Jace Murray and sophomore Duoth Gach continued to play big for the No. 4 ranked Packers (16-3 overall, 14-2 Big Nine). Murray tallied 19 points, four assists and five rebounds and Duoth racked up 25 points and three steals. 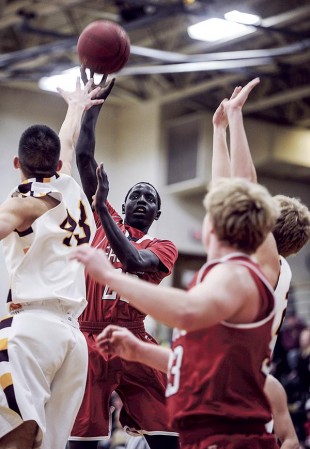 Austin’s Duoth Gach shoots over traffic during the second half against Northfield Friday night in Packer Gym. Eric Johnson/photodesk@austindailyherald.com

“I don’t know how it happens, it’s not like we’re running plays for them,” Austin head coach Kris Fadness said. “They just have the knack for putting the ball in the basket. They’re playing really well and it’s good for our team.”

Duoth, who scored a total of 46 points in Austin’s last two games, said he’s adjusting to the varsity game this year.

“It’s fast, and you’re playing against better athletes, but you’ve got to be confident,” he said.

The Raiders (12-8 overall, 9-7 Big Nine) took a 67-66 lead late in the game, but the Packers scored seven straight in a rally that saw Murray and Both Gach, who had 13 points, six rebounds and three assists, connect on three-pointers.

Austin led 27-18 in the first half after Murray hit a three, but the Raiders were able to claw within a point at halftime. Northfield out-rebounded Austin 26-12 in the first frame.

“They’re a really physical team and they really bullied us underneath in the first half and I think we did a better job in the second half,” Murray said.

The game saw both teams battle with foul trouble as there were a lot of whistles on both ends of the court. Northfield’s 6-9 forward Luke Harris missed a lot of time when he picked up his fourth foul with nine minutes left in the game.

“The way the game was officiated, Harris didn’t play a whole lot and he’s their scholarship level player. They were a little hand cuffed,” Fadness said. “Everybody was dodging bullets and the first half was a debacle the way it played out. We stagnated, we had some funky lineups out there and there was no rhythm.” 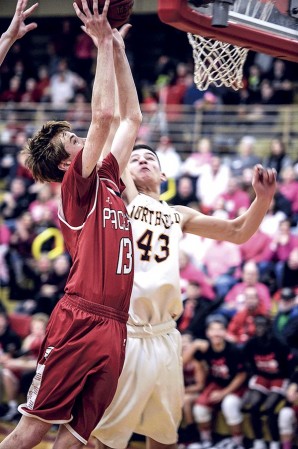 Austin’s Jace Murray is fouled going to the bucket in the second half against Northfield Friday night in Packer Gym. Eric Johnson/photodesk@austindailyherald.com

The Packers, who will play six of their last seven games on the road, have now won nine in games in a row and their next contest is at Rochester John Marshall 7:30 p.m. Thursday. The Rockets beat Austin 88-65 Dec. 11.

“We absolutely had to win this game [tonight], but we’ve got a ways to go,” Fadness said. “I think we’re a better team right now than we were the first time we played [JM].”