Large and in charge; Cyclists pedal past winter doldrums on their fat bikes 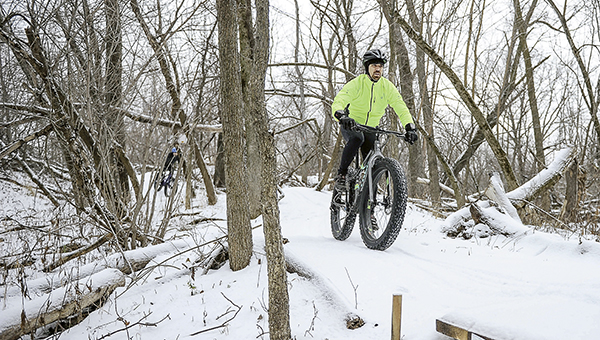 The ground is covered in a sparkling, white blanket of snow and the cold winds howl at the Austin mountain bike trail when a pair of bikers emerge and pass through the winter wonderland.

The two riders, Jens Raffelson and John Burkhart, cut through with ease on a quiet journey through the snowy woods.

About a decade ago, riding a bicycle in winter was not something most people thought of doing unless they were a little adventurous. 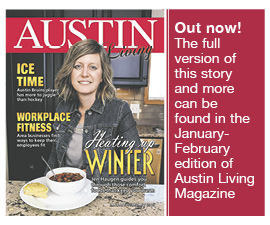 Now, with fat bikes growing in popularity, the idea of going out for a winter ride is becoming much more common. Rydjor Bike Shop in Austin started carrying fat bikes a few years ago, and recently the bikes have grown more popular, especially with riders who aren’t super serious about biking.

“This year it’s really blowing up,” said Raffelson, the manager of Rydjor. “It’s not like a snowmobile where you can take it through anything, but it does a lot better than a normal bike would. They work best if the trail is packed down a little bit.”

Burkhart, an employee at Rydjor, enjoys riding his fat bike all year long on the mountain bike trail and he said the wider tires, that give the bikes their name, give him more balance when he goes off road. Burkhart enjoys riding in the winter just as much as he does during the warmer months.

“I enjoy it a lot,” Burkhart said. “It’s like cross country skiing. It’s really quiet and it’s really peaceful in the woods. You get a really good workout. Versus regular cycling, I feel like it’s twice the workout in half the time.”

In comparison, Raffelson said the fat bike has a tire that is five inches wide, while mountain bike tires are two inches wide. The pressure in a fat bike tire is five to 10 pounds.

John Burkhart climbs a hill on a Fatbike, a bike that features extra wide tires for snow and offroad riding

“You basically float over the surface more than sinking down through it. It’s basically the same concept as a snowshoe, so you have a wider footprint,” Raffelson said. “In the 1980s, the mountain bike was supposed to go everywhere, but it’s pretty limited in traction. The fat bikes have really revolutionized where you can go.”

The fat bikes don’t travel as fast as regular bikes do but they come with much more traction. Even if a rider falls off a fat bike, they are likely not going fast enough to get injured and in the wintertime, the snow can provide more than enough cushion to prevent injury. 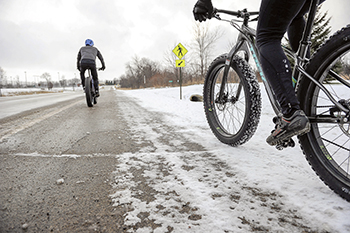 John Burkhart and Jens Raffelson, right, head toward a trail.

“You do slide out a lot more,” Burkhart said. “Sometimes you crash more. Since there’s snow on the ground, you’re probably not going to get hurt.”

Raffelson said there are opportunities for winter biking all over the state with both races and trails available.

Some extreme athletes even take their fat bikes to Antarctica for endurance events, but that’s not the norm. Burkhart is satisfied just to be able to get out and ride any time of year.

A mission of working with others