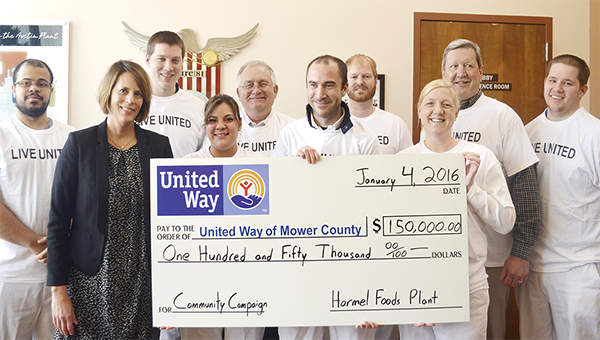 Hormel Foods Corps. plant employees added about $150,000 to The United Way’s annual campaign, pushing The United Way to over 90 percent of its goal.

“I’m very proud of our team, proud of working with [Executive Director] Diane [Baker] and her team,” United Way Campaign Chairman for the Austin plant Brice Siebe said during the check presentation Monday afternoon. “It was an exciting time this year, so we did well.”

The campaign at the plant went well, according to Siebe, starting in early October with a committee of about 20 people and raising about $150,000. This year’s goal is just about $1.2 million, and the Hormel Foods plant donation raised the United Way to about $1.1 million.

“We put together some bake sales and some basket fundraisers, and then we did our direct solicitation with all our employees in the plant,” Siebe said. “It took us about two months and it went very, very well.”

In the last five years, employees at the Hormel Foods plant have contributed $717,334 to the United Way.

“The employees at the Hormel Plant have been very active and consistent supporters of our programming,” Baker said in a press release.

“Their contributions have had a profound impact on our community,” Baker continued. “We are very appreciative for everyone who helps us do the work that we do.”

The money raised by the Hormel Foods employees will stay in Mower County through 57 programs in the community, including areas of education, income, health and basic needs.

“This generous support is proof that the United Way of Mower County does a very effective job distributing these donations where ether are most needed,” Fritz said in the release. “Hormel Foods employees at the Austin Plant and the United Way are an unbeatable team helping to address the many needs in Austin and Mower County.”

For Siebe, the fundraiser hits close to home as his wife is a teacher with Austin Public Schools, and she sees money come through for the Backpack Program, which several of her students are enrolled in.

“Everybody knows the things that the United Way contributes to, and we have a lot of employees here, and a lot of people in the county in general that are effected by everything the United Way does, and that’s the other reason it’s so important to us here at the Austin plant,” Siebe said.

The plant’s donation is down slightly from last year, which came in around $151,000, according to Siebe.

“The campaign was a little longer this year, we had extraneous variables pop up that kind of extended it out and didn’t have quite as clear a plan from the beginning,” Siebe explained. “But we were able to make it through and still pretty proud of what we came up with.”

United Way is still accepting donations to its fundraising campaign. Quality Pork Processors recently pledged $130,000 to the campaign, and the corporate office employees of Hormel Foods pledged $312,000. Last year the United Way was able to exceed its goal of $1.1 million. To make a donation, contact United Way of Mower County at 507-437-2313.

Lack of an alternative licensing program is illegal, judge says

By Beena Raghavendran Minneapolis Star Tribune Some teachers are celebrating a ruling that should make it easier for out-of-state teachers... read more