A mission of working with others 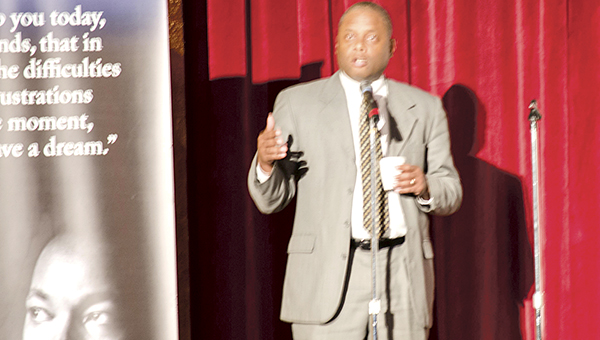 “It’s a struggle that continues to this day,” Lindsey said. “I think it relates to the conversation that people view human rights as important and then again it goes back to concepts of our country: liberty, equality and opportunity for all.”

The Austin Human Rights Commission organized the Martin Luther King Jr. Day showing of “Selma,” which centers on the Selma to Montgomery march and the passage of the Voting Rights Act of 1965.

Austin HRC chair Richard Lemons invited the commissioner to the event and to lead the discussion.

“I really appreciate the opportunity to work with them on such an event,” Lindsey said. “I really commend the local leaders here for having a mission to be dedicated to working on those issues.”

During the discussion, Lindsey said the movie’s themes are also prevalent to today’s issues, such as how important the voting rights act was and how important it is to ensure all of us have the right to vote.

Many signs around the state and nation point for the need to continue the discussion about such issues. On Monday, Black Lives Matter protesters briefly closed the Marshall Avenue-Lake Street bridge in the Twin Cities.

In Austin on Monday, Lindsey commented on the Black Lives Matter movement. He said a film like “Selma” is a reminder of a point in time in history when they did not matter.

“That government wasn’t willing to protect those respected lives,” Lindsey said. “It’s a need to sort of recognize that and bring that to attention, to ensure all lives matter to society.”

Lindsey said there’s still much work to be done.

“We’re still segregated too much,” he said.

However, he said he’s hopeful that discussions like the on Monday night will break those things down and hopefully have a positive impact.