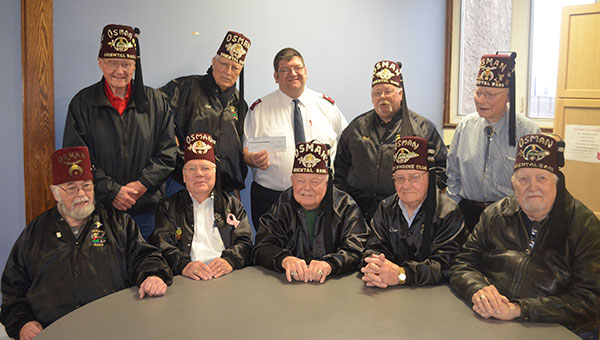 An annual tradition for members of the Austin Area Shrine Club & Oriental Band raised $14,480 for the Salvation Army and helped bring the yearly drive to near the $100,000 mark.

This amount was matched by Minnesota Masonic Charities to bring the total to $14,480. The volunteers rang about 170 hours during the project.

“It really has been going really well,” Amick said. “I mean, we’re ahead of last year. In fact, I think last year we raised about $65,000 in kettles and we’re already exceeding that.”

Amick hopes to raise at least $85,000 in kettles, as there is still a little over a day left for the kettles to be in front of stores. Amick expected to be close to $100,000 after Tuesday.

The kettle drive ends Dec. 24, but the mail appeal goes through Jan. 31.

Members of the Fidelity Lodge No. 39 rang bells at the Austin Hy-Vee each Friday and Saturday from Thanksgiving to Christmas, and a grant will also be submitted to match the amount collected on those dates. Amick said the Masons do not yet have an amount, but they have been doing well during the drive.

Money raised through the red kettles benefits the Salvation Army’s food shelf, rent and utilities, programs and more. The Salvation Army is targeting $170,000 in this year’s campaign after raising more than $150,000 last year.

“The nice thing for this for the community is it gives them an opportunity to feel like they’ve accomplished the fact that they’re giving to others,” Amick said. “It gives them an opportunity to help others financially. All this money goes towards our programs, whether it be food services or whether it be rent and utilities, all this money goes toward all our programs.”

In 2005, the board of directors of Minnesota Masonic Charities established the Matching Funds Grants Program as a method of supporting the good work of Lodges and Masonic Bodies, while encouraging members to be involved in their communities. The Matching Funds Grants Program contributes broadly to the betterment of the people in Minnesota through the support of charitable programs and services throughout the state.

At the end of 2015, Minnesota Masonic Charities will have provided about $4 million in matching funds to communities in Minnesota.

Amick and organizers are hoping for a big finish, as the drive sets the budget for the entire year and goes to Salvation Army programs.

“We’re praying for a strong finish and, like I said, whether it be kettles or mail appeal, we’re praying we make our goal,” Amick said.

People can also donate to the Austin Salvation Army online at SalvationArmyNorth.org/Austin.