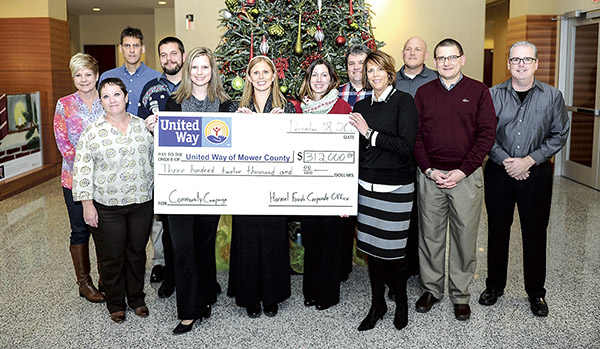 Employees for Hormel donated $312,000 to the United Way Friday afternoon at Hormel corporate. The check was presented to Diane Baker, executive director of the Mower County United Way. Eric Johnson/photodesk@austindailyherald.com

The corporate office employees of Hormel Foods presented a check for $312,000 to the United Way Friday afternoon at the Hormel Foods Corporate Office. The money was 13 percent more than the 2014 record-breaking total of about $275,000. 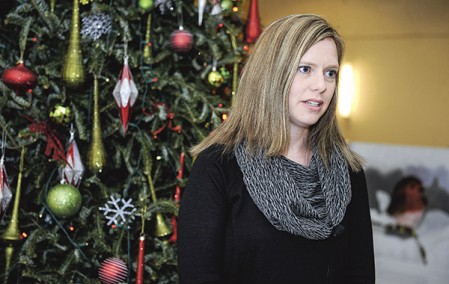 Erica Tweeten talks Friday about the money raised by Hormel employees and donated to the United Way. Eric Johnson/photodesk@austindailyherald.com

“We had an outstanding turnout with our employees,” Erica Tweeten, claims manager with Hormel and the company’s United Way campaign chair, said. “The participation was unbelievable and they just continue to support United Way year after year.”

Executive Director of the United Way of Mower County Diane Baker was excited about the significant increase in donations this year, and the partnership between the United Way and Hormel.

“It’s hard to describe what this means to our community,” she said. “It is truly amazing. This is an amazing group, it’s an amazing company, and we’re so thrilled to be such a great partner with Hormel Foods.”

The money raised by the Hormel Foods Corporate Office employees will contribute to the United Way’s projected commDonations to the campaign will stay in Mower County through 57 programs in the community, including areas of education, income, health and basic needs.

She was excited to see all the participation from employees this year.

“It feels amazing that they all participate and want to contribute back to our community,” she said.

Baker was happy about the strong partnership with Hormel Foods, which continues year after year.

“We have an amazing partnership here, it’s from the top down and it’s really not to be taken for granted the support that they give this community,” she said. “It’s amazing and they get it, they get that there’s a need and they’re willing to work hard to help meet the needs of this community.”

United Way is still doing its annual fundraising campaign. Quality Pork Processors recently pledged $130,000 to the campaign. Last year the United Way was able to exceed their goal of $1.1 million. to make a donation, contact United Way of Mower County at 507-437-2313.unity need of $1,225,000.

Shopping with a hero sums up the season