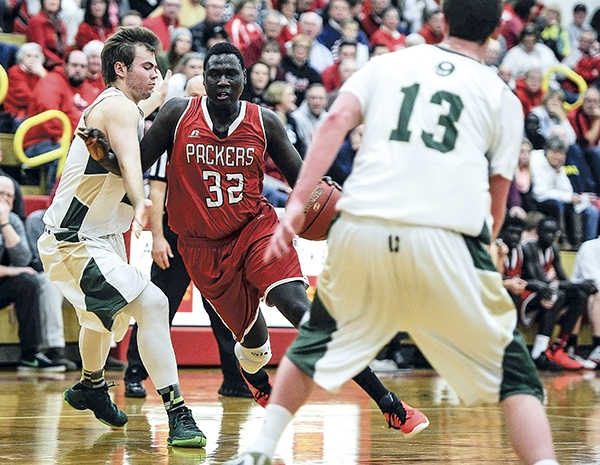 Austin’s Oman, Oman drives the ball inside in the first half against Rochester Mayo Friday night in Packer Gym. Eric Johnson/photodesk@austindailyherald.com

The Austin boys basketball team was firing on all cylinders as it downed Rochester Mayo 79-50 in Packer Gym Friday.

Austin (3-0 overall, 2-0 Big Nine) went 10-for-22 on three-pointers and five Packers scored at least eight points in the win. The Packers stormed out of the gates on a 27-8 run as their full court pressure defense thwarted Mayo’s offense. 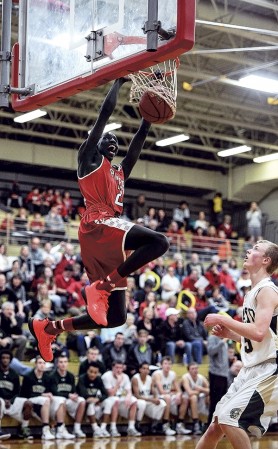 Austin led 47-29 at the half and 30 of those points came off the bench. Duoth Gach became the third different leading scorer for the Packers in three games as he poured in a career-high 15 points.

Austin head coach Kris Fadness said his team’s ball movement and athleticism were both keys in the victory.

“Every night it’s going to be somebody different [scoring]. It’s just the way it’s going to be. We’re going to play ten guys, we’re going to try and wear people down and we want to run,” Fadness said. “I don’t know if we can play much better than that. We played pretty darn well in that first half.”

Duoth made highlight play for a steal and a dunk in the first half and then he showed his shooting touch by hitting three three-pointers in the win.

“I got open looks from Zach [Coffey] and Tate [Hebrink],” Duoth said. “Everybody played confidentially. Everybody can run the floor and attack the rim.”

Mayo (1-4 overall, 1-3 Big Nine) hit a 3-pointer on its opening possession, but that was the only time it led all night. Austin came at the Spartans in waves and the Packers provided pressure on a constant basis.

“We were just pumped and were feeding off the crowd the whole night. Once we started hitting shots, it intensified so much,” Coffey said. “You always have to play all out and you’re always playing for the next possession. We know that we have a lot of guys off the bench that can play. Once it’s your time, you’ve got to be ready.”

Both Gach had 12 points for the Packers, Oman Oman had 11 points and Jace Murray had six points, four rebounds, four assists and five steals. Austin moved the ball consistently throughout the night. 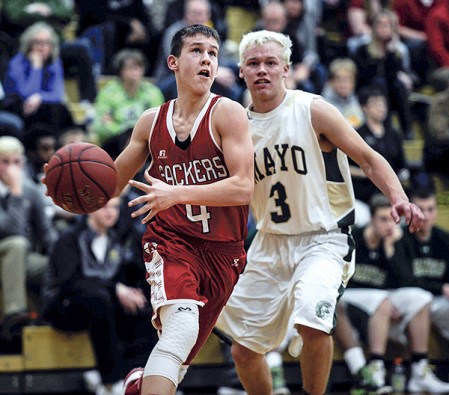 Austin’s Tate Hebrink drives past Rochester Mayo’s Trajan Grimsrud on the way to the hoop in the first quarter Friday night in Packer Gym. Eric Johnson/photodesk@austindailyherald.com

“I don’t think it matters [who scores.] At least it shouldn’t,” Coffey said. “We just want to play for each other and get the ‘W’ every night.”

Pate Hagen and Moses Issa each scored their first varsity points in the win for the Packers.

The Southland girls basketball team lost to Dover-Eyota (3-1 overall, 2-0 Three Rivers), which is ranked No. 8 in Class... read more