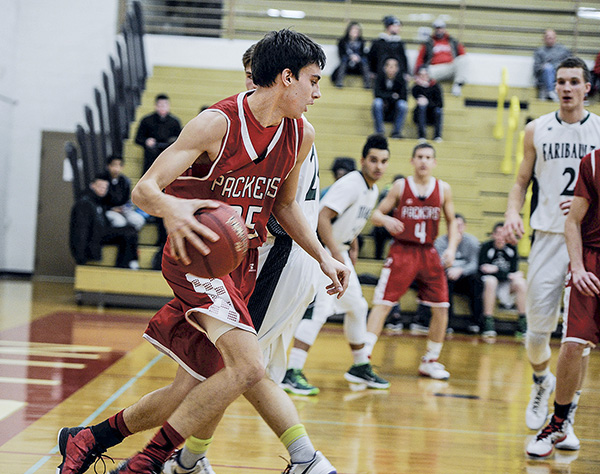 Austin’s Trent Brown manuevers under the net against Faribault in the first half Tuesday night in Packer Gym. Eric Johnson/photodesk@austindailyherald.com

Austin senior Jace Murray got off to a fast start and he kept going as the Packer boys basketball team beat Faribault 57-46 in Packer Gym Tuesday.

Murray hit a pair of early 3-pointers to put Austin up 9-6 when they had trailed 5-0 six minutes into the game and he finished with a career-high 15 points, five rebounds and five steals.

“There’s going to be a lot of different leading scorers [for us] every night,” Murray said. “I didn’t really think about it, I just went out there and shot the ball. It went in.” 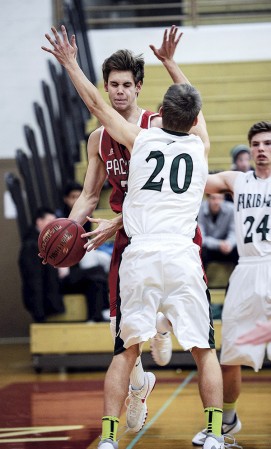 Zach Coffey tries to pass around Faribault’s Ramsey Shaffer during the first half Tuesday night along the baseline in Packer Gym. Eric Johnson/photodesk@austindailyherald.com

Austin’s defense provided most of the surge as the Packers forced 25 turnovers to keep the Falcons (0-2 overall, 0-2 Big NIne) at bay. The Packers (2-0 overall, 1-0 Big Nine) led by as many as 15 points in the second half, but they never got their offense going in high gear.

A pair of sophomores stepped up in the win for the Packers as Duoth Gach scored 11 points and Tate Hebrink added five points, five assists and five steals.

“It seemed like they were always passing to the wing and then they would skip it. I tried to read it,” Hebrink said.

The Packers are pleased with winning their first two contests, but they’d like to play better when they host Rochester Mayo at 7:15 p.m. Friday. Austin committed 18 turnovers on Tuesday.

“We’ve got a lot of work to do. We have to get better in our half-court offense and we turned the ball over too much,” Hebrink said.

Fadness is also happy with the 2-0 start, but he’d like to see the Packers push themselves to improve, especially in the half court offense.

“Faribault’s a good team, but they didn’t play real well tonight and I don’t think we played real well tonight either,” he said. “You’re going to have games like this early in the season and I think these two teams will be better the next time we play. I’ve been in a lot of ugly wins before and a lot of ugly losses and winning is much better.”