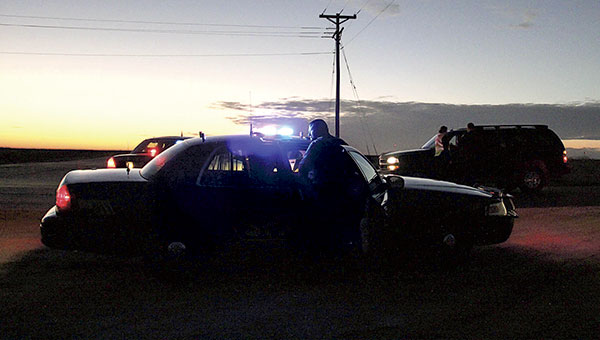 Two anhydrous ammonia leaks caused Interstate 90 to be shut down and homes to be evacuated Monday night.

Mower County Sheriff Terese Amazi confirmed two 1,000 gallon anhydrous ammonia tanks leaked from burst hoses — one while being towed by a farmer and the second about two miles away at a grain elevator on County Road 7 south of Elkton sometime before 5 p.m.

As of 6:25 p.m., the tanks were shut off, but an anhydrous cloud was still hovering.

A one-mile perimeter was set up around Elkton earlier in the evening, and an unspecified number of homes were evacuated near the incident. Farmers use Anhydrous ammonia for fertilizer, but it’s a toxic chemical that can burn and be harmful to eyes. The chemical can linger on clothes, so victims can get a second exposure, Amazi warned.

Several firefighters and a deputy were exposed to the chemical and sustained minor injuries after the cloud changed direction unexpectedly. No other injuries were reported.

Cars line Interstate 90 between the Elkton and Dexter exits as portions of the road were being closed for an anhydrous ammonia leak Monday.
Photos by Jason Schoonover/jason.schoonover@austindailyherald.com

Sometime around 5 p.m., law enforcement closed Interstate 90 between the Elkton and Dexter exits. The interstate was closed until about 9:30 p.m.

Though the leak started south of Elkton, the cloud had moved north to Interstate 90, and Amazi said it took longer to dissipate because of the low winds.

As of this morning, Amazi said the area should be safe for people after the cloud dissipated. A crew took readings to test the air last night in the area and will again today.

Amazi said she hasn’t experienced an event like this in her more than 27 years on the force.

“I haven’t had one of these in my career,” she said.

Deputies train for such spills but rarely have to use the training, but Amazi said she was happy with how people responded.

She said people will be inspecting the tanks to see how the leak started, whether they were tampered with or if there were simply faulty hoses.