Suspect arrested in connection to homicide 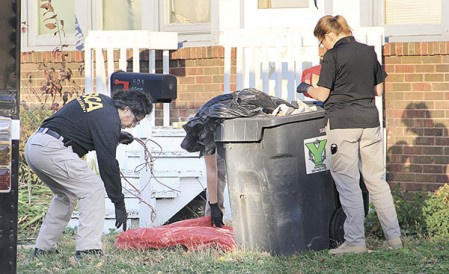 Investigators with the Minnesota Bureau of Criminal Apprehension take evidence from a trash bin outside a home on the 400 block of South Main Street in Austin Thursday afternoon. Jason Schoonover/jason.schoonover@austindailyherald.com

The Mower County Sheriff’s Department has announced that it has arrested a suspect in connection to a homicide victim discovered Sunday morning south of Austin.

Sheriff Terese Amazi confirmed that Mike McIntosh has been arrested for 2nd degree murder in the death of 39-year-old David Madison. No further details of the arrest have been made available.

Madison’s body was discovered Sunday morning in the Cedar River along Highway 105. It’s still unclear as to where the killing took place.

The sheriff’s office narrowed down the last time Madison was seen alive was between 10 and 11:30 p.m. on Saturday night in the downtown Austin area.

On Thursday, The Minnesota Bureau of Criminal Apprehension, investigated a residence in the 400 block of South Main Street that was tied to the homicide case, from between noon and 7 p.m., taking photographs and measurements of the property as well as collecting evidence from a trash bin.

A second home at the corner of Eighth Street Northeast and Third Avenue Northeast was also taped off by the sheriff’s department. It too had been related to the case.

Check back to www.austindailyherald.com as more information becomes available.

Bruins start slow and fall to Chill in Riverside