Austin senior Mark Manyuon had to wait a year to play varsity basketball for the Austin Packers.

On Tuesday night it was worth the wait. 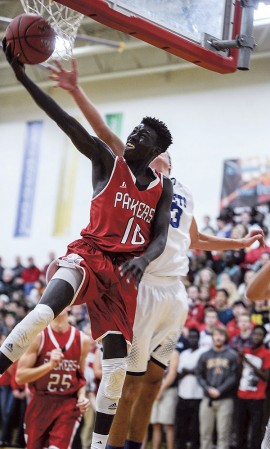 Austin’s Mark Manyuon goes in for the reverse against Kasson-Mantorville in the first half Tuesday night in Packer Gym. Eric Johnson/photodesk@austidnailyherald.com

Manyuon led a big second half Packer charge as Austin battled past Kasson-Mantorville 74-60 in the season opener in Packer Gym. Manyuon, who transferred to Austin from Lyle-Pacelli last year, scored 20 points and he was an integral part in Austin forcing 23 turnovers.

Manyuon, who was on LP’s varsity team as a sophomore, spent last season playing for the Austin JV team.

“Tonight was a big game for me,” Manyuon said. “It was my first varsity game at a really competitive level. It’s a long year, but I wanted to start strong.”

The Packers are glad to have Manyuon on board this season and Fadness said he brings a lot to the lineup.

“Mark gives us a really nice athletic dimension,” Fadness said. “I’m sure he had a lot of fun tonight. We had a nice crowd and he played well.”

Austin trailed 14-2 after the first five minutes of the game, but it pulled to within 32-26 at the half. The Packers (1-0 overall) opened the second half on fire as they started it on a 22-2 run over a span of six minutes to take a 48-34 lead. A lot of Packers stepped up in that surge as Both Gach had a few run-outs, Zach Coffey, who had nine points, six rebounds and four assists, made some plays in the open court and Oman Oman, who had seven points, 10 rebounds and five assists, and Duoth Gach hit 3-pointers.

“We got out to a bad start. I didn’t like the first ten or twelve minutes of the game,” Fadness said. “But I thought we were starting to wear them down a little bit and I thought our pressure was getting to them. We just really stressed at halftime to keep applying pressure. Zach Coffey, Mark and Both did a good job of getting to the rim and making plays.”

Both, a sophomore, racked up 15 points, including a breakaway two-handed dunk in the first half. He said that the Packers had to keep pressuring the KoMets (1-1 overall). 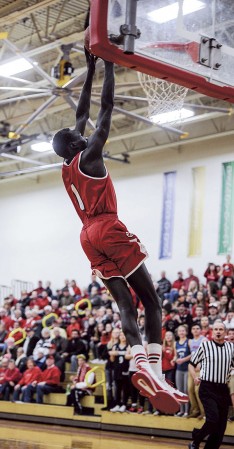 Austin guard Both Gach throws down Tuesday night in the first half against Kasson-Mantorville in Packer Gym. Eric johnson/photodesk@austindailyherald.com

“We had to keep them running so we could get them tired,” Both said.

KM was led by the sharp shooting of Braxton Raymond, who had 28 points as he went 7-for-16 on 3-pointers. Raymond helped end Austin’s season last year in a Section 1AAA tournament opener.

“It’s the first game and Kasson is a good team,” Fadness said. “Braxton Raymond is a heck of a player and coach Raymond does a good job with them. That’s a good win for us. We’ve just got to get better at half court basketball.”