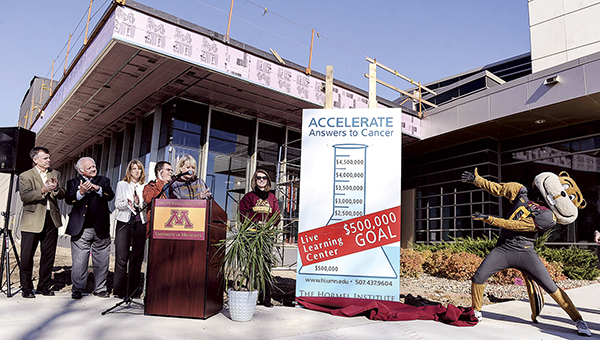 With the help of Goldy the Gopher, The Hormel Institute announced Saturday afternoon a grant from the University of Minnesota of $1.5 million for the institute’s Live Learning Center. – Photos by Eric Johnson/photodesk@austindailyherald.com

University of Minnesota mascot Goldy and several dignitaries announced Saturday that The Hormel Institute is close to meeting its goals for building a collaborative center in Austin.

“I just want to say thank you to each and every one of you for showing up today,” Gail Dennison, the Institute’s director of public relations, said during the announcement Saturday. “There is so much to celebrate at The Hormel Institute, University of Minnesota, and the work that is done here is for each and every one of us.” 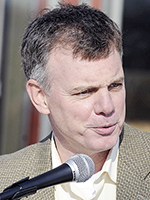 “I think as it grows now what we’re seeing is the people that come here to work are touching our lives in a lot of ways,” he said. “It’s making Austin a truly global community.”

Expected to be completed in early 2016, the $4.5 million learning center will feature technology for global communications, including high-definition video conferencing inside of a 250-seat lecture hall with theater-style seating.

It will have an adjacent multipurpose room for various uses, including poster sessions by scientists during research conferences.

“The Live Learning Center, again, is a place where our scientist will come together and share research globally,” Dennison said. “We have two cancer conferences for example already scheduled for 2016.”

The University’s contribution to the Live Learning Center supports an ongoing effort to invest in research infrastructure led by University President Eric Kaler and Vice President for Research Brian Herman. 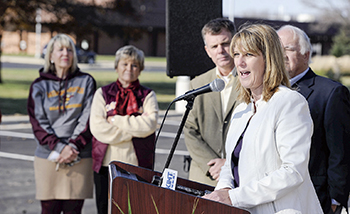 “I would just like to say that on behalf of the Foundation I just want to express our gratitude to the University of Minnesota and their commitment to The Hormel Institute and their support to the Live Learning Center,” she said. “We’re excited about what this will mean for the global presence of the Institute and the impact on their research.”

“It’s a really great thing that everybody’s willing to step in and make this a reality right here in Austin,” she added.”Thank you.”

This funding is in addition to the Foundation’s major financial support given annually for the Institute’s operations. More than $1 million in additional funds have been raised from other donors throughout the region for the Live Learning Center, with a goal to raise the remaining $472,000 by next spring for acquiring technology for the new lecture hall. Overall, the 2014-16 expansion — which also includes a 20-lab addition for cancer research on the east side — will nearly double The Hormel Institute’s facilities as well as its overall employment over the coming years from about 125 to 250 employees.

The Hormel Institute will host its first research conferences in the Live Learning Center next year. The China-U.S. Frontiers in Cancer Research symposium will be June 1-3 followed by the International Skin Carcinogenesis Conference on Sept. 21-24. 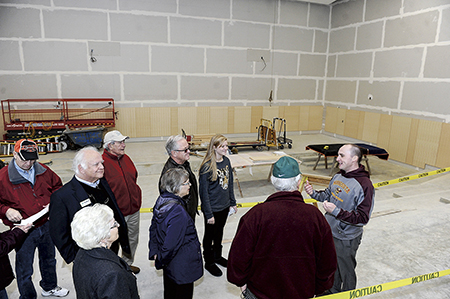 The Hormel Institute’s Tim Ruzek guides a group through the still under construction Live Learning Center Saturday afternoon following an announcement that the University of Minnesota gave $1.5 million to the institute project.

“We just are very thankful to have such support and the reminder is that it’s a gift that is hope for the future,” Dennison said. “Because again, our scientists are dedicated to discoveries that will extend lives and find healthier alternatives in cancer therapies.”