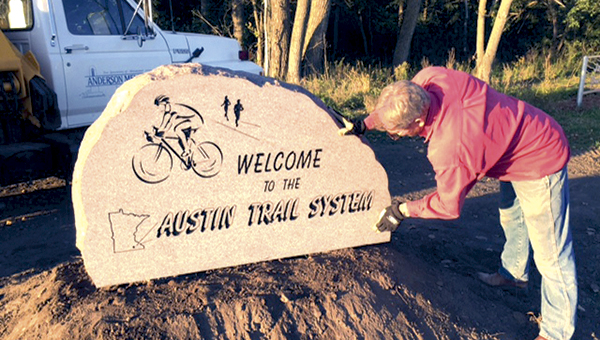 Vision 2020 volunteers are pedaling ahead on two Austin bicycle plans with plenty of help.

Work on Austin’s Red Bike program is picking up steam, and volunteers have collected about 35 bikes for the program where residents will be able to borrow a designated bike from the city free of charge any time they want.

The first round of five bikes were taken apart earlier this week, and the frames were sent over to Riverland Community College’s automotive program to be painted next week.

Raffelson and Rydjor sent over the first set of five bike frames to Riverland for painting, and they’ll gauge how often Riverland students can work on the bikes with this first batch.

Riverland’s automotive program and its students are donating time to paint the bikes.

After painting, the bikes will return to Rydjor to be reassembled and repaired. That process should continue throughout fall and winter. Raffelson noted the work comes at a good time for Rydjor, as business slows a bit in winter.

Thus far, the bikes have come in through donations, and organizers were able to obtain bikes from the Austin Police Department before they were auctioned off.

Organizers are working with the city of Austin to create the Red Bike program, and still hope to get more adult, single-speed bike through donations, which can be dropped off at Rydjor, 219 N. Main Street.

Raffelson said Red Bike is garnering a lot of attention, and he’s gotten calls from the Twin Cities and Florida about the program.

“Everyones excited, people are calling from all over,” he said.

Red Bike is set to get underway next spring. Originally, organizers had targeted 60 bikes for the first year, but Kime said they’d start if they only have 40 to 50 bikes.

“We’re just going to prepare and we’re going to roll out when the time comes,” Kime said.

Austin is already welcoming residents to town on the Shooting Star Trail. 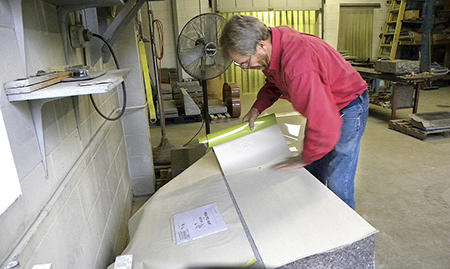 Anderson Memorial’s Jeff Anderson works to design a granite monument, which is now near 21st Street Northeast on the Shooting Star Trail as a welcome to Austin.

Jeff Anderson of Anderson Memorial installed a trail monument earlier this month near 21st Street Northeast on the Shooting Star Trail as a welcome to Austin.

Kime has light-heartedly called the spot the “selfie station” and envisions it being a place bikers and trail users can stop to take a picture as they enter Austin.

“I thought it needed to be a little higher for that perfect selfie,” Kime said.

The spot will feature a bench, landscaping, a decorative stone, a map and QR codes with details on Austin destinations. 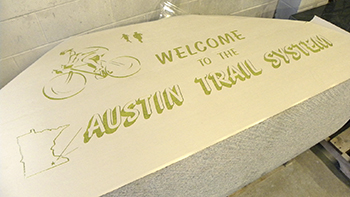 Thus far, the memorial includes an granite stone designed by Anderson, which features art of joggers and a cyclist, and a granite bench in honor of Dr. Richard “Dick” Schindler, an Austin cycling enthusiast who passed away last year.

Anderson said it’s been a fun project to work on, as most people involved are excited and enthusiastic about it.

“We always love working on community projects here, because everybody is on board,” Anderson said.

Kime was pleased to already see people stopping by the site and sitting to rest on the bench.

“It was kind of neat to see already people knowing what that’s for,” he said.

Landscaping should be completed yet this year with the help of Randy Berg of Berg’s Nursery, and Kime said he’s been in touch with Spruce Up Austin representatives interested in partnering for additional plantings around the station.

“I think that’d be a great thing,” Kime said.

Best Bets: Austin setting up for laughs and song