The Austin-based meat packing company’s fortified poultry-based spread (FPBS), which was developed through Project Spammy in Guatemala, is now available for purchase by hunger relief organizations under Title I for U.S. Department of Agriculture (USDA) feeding programs and Title II for U.S. Agency for International Development (USAID) programs.

The product was designed by Hormel and was created to help address malnutrition in children, and the spread yielded promising results in nutrition research.

“It is encouraging to see these results and the success that FPBS is having in improving the lives of so many children in need,” said Kevin Myers, Ph.D., vice president of research and development at Hormel, in a press release.

FPBS is used as an ingredient that blends easily into customary diets, and the fortification can be customized to meet the needs of the recipient population.

For example, the product was tailored to meet the specific micronutrient needs of children in Guatemala based on findings from earlier research conducted by Hormel Foods through Project Spammy. 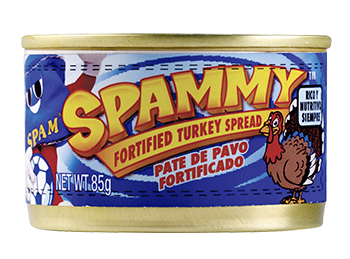 Hormel designed and developed the spread as part of Project Spammy, but it won’t be called Spammy worldwide. It will be referred to by description — fortified poultry-based spread — based on how the USDA lists foods available for purchase by hunger relief organizations.

It will still be called Spammy in Guatemala. Spammy is shelf-stable poultry product fortified with vitamins and minerals, to help malnourished children. Hormel works with Food For The Poor and Caritas Arquidiocesana to distribute the product to family centers and orphanages. Since the inception of Project Spammy, Hormel Foods has contributed more than 8.5 million cans of the product, and many employees have traveled to Guatemala to help with the project.

“Every time I return to Guatemala it is amazing to see the growth of this project and the positive contribution the product is making in the lives of so many,” said Jeffrey M. Ettinger, chairman of the board and CEO of Hormel, in a press release. “We are encouraged by the success thus far and are excited about the potential of FPBS to help improve the lives of children and families.”

In a public/private partnership jointly funded by Hormel Foods and the Micronutrient-Fortified Food Aid Products Pilot (MFFAPP), administered by the USDA’s Foreign Agricultural Service under the McGovern-Dole International Food for Education and Child Nutrition (McGovern-Dole) Program, this latest research demonstrated the benefits of supplementing traditional diets with high-quality protein and micronutrients.

“The findings revealed the magnitude of deficiencies of two vitamins – D and B12 – in young Guatemalans, and FPBS has outstanding potential to address this situation when it is incorporated into meals fed to children,” said Dr. Noel W. Solomons, scientific director for CeSSIAM, a partner in the project stated in a press release.

During the trial, more than 160 preschool-age children in Guatemala ate either a fortified or unfortified version of the poultry spread on school days over a 20-week period. The fortified version contained the addition of several micronutrients, such as vitamins D and B12, which are important nutrients for children, but are deficient in this area of the world. Both versions were identical in protein, calories and fat.

•There was a 44 percent reduction in the number of school days missed due to illness;

•Children receiving the fortified version of the product showed statistical improvements in vitamin D and B12 levels; and

•A positive correlation was found between increase in cognitive gain scores and vitamin D concentrations in the treatment group.

Hormel has been working with partners in Guatemala since 2008 to provide FPBS to malnourished children and donated 2.5 million cans of the protein-based item in 2014.

Hormel Foods and its partners, Caritas and Food For The Poor, are also building opportunities for thousands of families by providing FPBS to 8,300 families, representing more than 30,000 children in Guatemala. Additionally, Hormel Foods provides scholarships to eight high school-age students to attend the Villa de los Niños boarding school in Guatemala City.