A kidney for a cousin; Local man gets a second chance at life 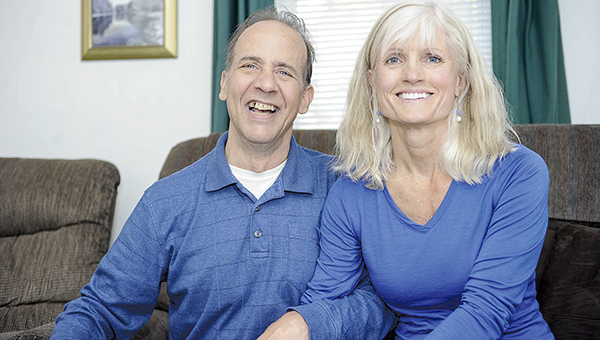 Jay Wangen and cousin, Barbie Laughlin, sit together in Wangen’s Austin home Thursday afternoon. Laughlin is donating a kidney to Wangen, who has been in need of a kidney transplant due to complications with diabetes. — Photos by Eric Johnson/photodesk@austindailyherald.com

Jay Wangen didn’t ask his cousin to give him her kidney, but through her gift he will get a second chance.

Wangen has faced several health issues: Along with 15 years of diabetes, he had heart bypass surgery and a mini-stroke. Then about five years ago, doctors told him he would need a new kidney. Originally from Rochester, Wangen has lived in California for about 29 years. When doctors told him he was still healthy enough to choose where he wanted to be treated, he decided to come back to Minnesota.

“I thought, maybe this is the Lord telling me it’s time to go to Minnesota,” he said. 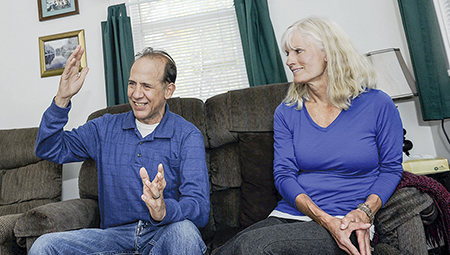 Jay Wangen sits with his cousin Barbie Laughlin and describes what led up to Laughlin donating a kidney to Wangen.

Wangen and his wife, Genely, moved next door to his parents in Austin about two years ago so Wangen could be treated at Mayo Clinic and be near family. Wangen has been on dialysis about two years and was on a long waiting list for a new kidney. About five months ago, he met up with his cousin Barbara “Barbie” Laughlin after her mother passed away.

Laughlin saw Wangen’s parents, Norma and Pastor Russell Wangen, at her mother’s funeral and asked how Wangen was. After Laughlin found out Wangen was on dialysis, it didn’t take long for her to decide to donate one of her kidneys.

“It was at my mom’s funeral, and my brother did such a nice eulogy, [talking about] everything she had done … a lot of things,” Laughlin said. “And I was sitting there in church wondering ‘What are they going to say about me?’ I couldn’t really come up with anything, and then I thought, ‘You know what, I think the good Lord is speaking to me. He’s telling me I have to give my kidney to Jay.’” 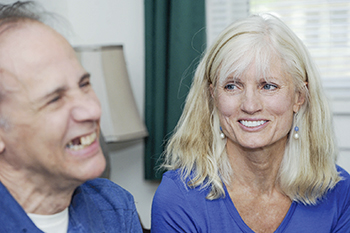 Laughlin smiles as her cousin Jay Wangen tells of a story of when they were young.

“I just didn’t know if he wanted a girl part, though,” Laughlin teased her cousin.

Other family members weren’t a match for Wangen, and his wife — who also wasn’t a match — considered donating one of her kidneys to “the pool” to help Wangen get to the top of the donor list. Yet there wouldn’t have been anyone to help them both with the recovery process, which will take about two to three months for Wangen, and about six weeks for the donor — in this case, Laughlin.

As a runner who enjoys marathons, Laughlin said it will be hard to give up running for six weeks, but it would be nice to get a bit of a rest as well.

“No running for six weeks and I can’t lift anything over 10 pounds, which gets me out of a lot of fall yard work,” she laughed.

Laughlin also recently retired, which meant she also had time to do the time-consuming procedure and testing that donors go through, which she started in April.

“I just thought the timing was [good],” she said.

Wangen was very thankful to his cousin for donating her kidney to help him survive.

“Just 200 percent,” Wangen said to his cousin about his appreciation. “I mean, Barb, thank you so much for fixing me up.”

Wangen will spend time in Gift of Life Transplant House, a recovery home in Rochester. While doctors say recovery will take two to three months, Wangen has heard of people starting to feel better right after the new kidney is in place.

“I might get off the surgery table and go for a jog,” he laughed.

Wangen hasn’t been very nervous for himself, but he’s been a bit nervous for his cousin. Laughlin admitted she’s a little nervous to give away one of her kidneys, but she’s grateful to be a match and be able to help Wangen. The only thing Laughlin is disappointed to miss is the celebration at the end of the surgery, when the doctor comes out to tell family and friends everything went well. She told her husband to record the excitement.

A website on CaringBridge was made for Jay, and can be found at www.caringbridge.org/visit/jaywangen.

Wangen and Laughlin are scheduled for surgery Oct. 20 in Rochester.

Singing for scholarships; Season 7 winner of the ‘The…