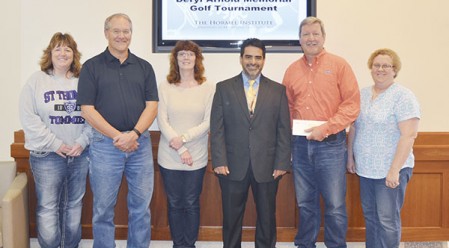 Hormel Foods Corp. plant employees recently donated more than $4,200 in support for The Hormel Institute’s cancer research in memory of a former leader.

The annual Deryl Arnold Memorial Golf Tournament now has raised more than $21,000 since 2009 in support for world-renowned cancer research at The Hormel Institute, University of Minnesota. Plant Manager Tim Fritz and other employees presented the gift Aug. 28 to Dr. Sergio Gradilone, a section leader who accepted the donation on behalf of The Hormel Institute faculty and staff.

Hormel Foods plant employees and suppliers participated Aug. 3 in the annual event held this year at the Oaks Golf Club in Hayfield. The fundraiser honors the memory of former Hormel Foods plant manager Deryl Arnold, who passed away from cancer.

“We’re especially proud to make this donation in Deryl’s name,” Fritz said in a press relase. “While Deryl may have lost his battle with cancer, we hope that the money donated in his name will help those battling cancer now and in the future.”

As with any gift to The Hormel Institute, 100 percent of the tournament’s donation will directly support cancer research.

12 in state sickened in salmonella outbreak