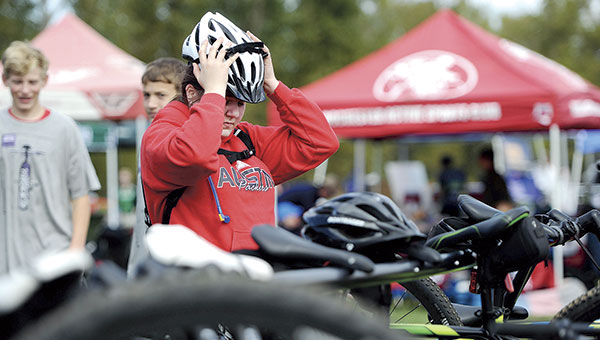 Austin’s Grace Shupe puts her helmet on next to her bike at the Austin tent Sunday. Austin hosted a Minnesota High School Cycling League’s race at the new course next to Todd Park and this was Shupe’s first race.

Dillon, who is in his second year on Austin’s cycling team, has hypoplastic right heart syndrome, which has kept him from competing in traditional sports, but he’s enjoyed being part of the cycling team.

“For us as a family, it’s meant more than just a sport,” his mom, Charity Lifka, said. “It’s really helped our son feel like he’s included on a team for the first time ever.”

To state and Austin cycling league organizers, a key component of cycling is that it’s inclusive and family oriented. No one gets cut from cycling teams and everyone participates.

“Here, everybody participates,” league co-founder Gary Sjoquist said. “Even the kid who’s in last place, if he finishes, he’s going to score points for his team. So every kid knows that finishing is important and it gives them a sense of accomplishment to do something they’ve never done before.”

Cycling is often seen as a home for student athletes who didn’t fit in traditional sports. In fact, inclusiveness is one of the league’s five core principles, along with equality, strong mind, strong body and strong character.

“It’s not so much about high-level competition, it’s more about doing your best and being with other people and cheering them on to their best too,” Sjoquist said.

Lifka said cycling is the only competitive sport Dillon could participate in with his heart syndrome, which is a condition where his right ventricle doesn’t fully develop. 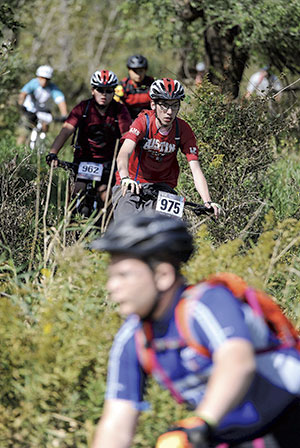 Austin’s Dillon Kelly rides in a group of riders during the freshman and sophomore races Sunday of the Austin’s Minnesota High School Cycling League’s race at the new course next to Todd Park.

With the help of his doctor and the late Dr. Dick Schindler, Dillon was able to compete with the team last year and this year.

“He was able to finally compete in a sport, which is a really big deal because guys want to compete, you want to be in a sport,” Lifka said. “It was very discouraging for him, so this team has increased his confidence 100 percent.”

Since Dillon has a defibrillator pacemaker — often called an ICD — to help treat his condition, he can’t play contact sports and often has to pace himself to go at a 50 to 60 percent level. He uses a special pouch to hold pacemaker unit as he races.

Since joining the team, everyone has encouraged him to just go out and enjoy the races.

Last year, Dillon only completed the last race of the year after Dr. Schindler, who helped form the Austin cycling team, passed away. Lifka said Dillon completed it in Dr. Schindler’s memory.

Lifka praised the league as a sport that’s enjoyable for all the kids.

Lifka joked her biggest complaint was that the league didn’t start sooner, since Dillon is a senior.

“I just would encourage kids who are looking for something and who have never been in sports before to give it a try,” she said. “If you can ride a bike, I think you’d enjoy it.”

Lifka noted that the league has loaner bikes and scholarships available to help families pay the $40 race fee and to help keep a sport for anyone.

Dillon said it’s fun to see Austin’s team growing. The team doubled its size in its second year with 18 racers, and another is thinking about signing up.

The state cycling league has also grown in recent years, and Sjoquist said many other communities have reached out to him about starting teams and hosting races.

Some cyclists, like Austin’s Grace Schupe, were racing for the first time Sunday.

Grace finished in the middle of the pack in her first race, and she noted that she was pleased with the positive atmosphere.

“Everybody was very polite when passing and being passed,” she said. “There was no swearing or anything like you might find in other sports.”

Grace, a sophomore, is the first high school girl on Austin’s team, and she encouraged others to go out of the league.

“I think it’s a great organization,” Grace said. “More kids should do this. We’re all very close.”

Between races, most of the team members sat in a circle of chairs in the team’s tent. For two brothers on the team, it made for a bit of friendly competition.

“This is my first year, and I’m better than Slava,” Timur Kritzer said of his brother.

That friendly, brotherly competition was another part of what the cycling league aims to do, as Timur joined his brother, Slava, on the team.

Sjoquist said the cycling league is really about creating cycling families where a student joins the league and soon the parents, younger siblings and friends all start riding too.

“Now you have families who are planning mountain bike trips and vacations for an activity they didn’t know anything about two years ago,” Sjoquist said. “And the result is they get healthier, the kids do better in school, they get more focused, and the parents now have a new activity they can do as a family.”

Timur and Slava’s father, Mower County Judge Jeff Kritzer, was also impressed by the strong sense of community and family within the league.

“It’s great to see this many kids having this much fun together,” he said.

Last season, Jeff frequently rode with the team, but he hasn’t had as much time this season as a judge. Like many involved in the group, Jeff said the league isn’t centered on wins and losses.

“Like our kids, they’re out here to do their best, but it’s not all about winning,” he said. “It’s about just really having fun and supporting each other and having a great time.”

Jeff noted the sport promotes healthy living, and he noted the rest of the family has gotten into biking more too. He rode with the team some last year, but he hasn’t had as much time this year. However, the family took a vacation to Durango, Colorado, and Moab, Utah, where they did some mountain biking.

Timur and other team members thanked their coaches, Salmon and Hataye, along with people like Belita Schindler for all their work setting up the race. They also thanked Belita’s husband, Dr. Dick Schindler, who passed away last October in a mountain biking accident. Salmon thanked Hormel Foods Corp., Hormel Foundation President Gary Ray, Bob Maus, Steve Kime and Austin’s racers for their work and support.