A matter of teamwork; Austin savors race day as organizers thank many who made course possible 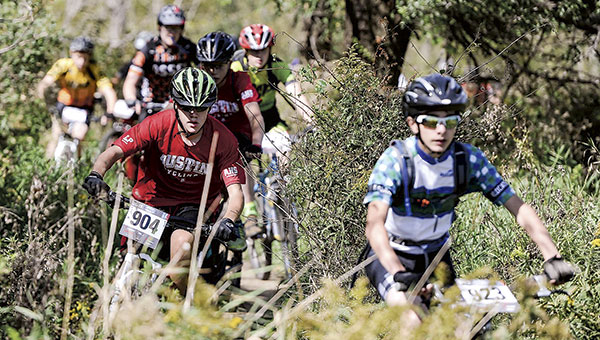 Sam Keenan rides in a pack Sunday during the freshman and sophomore races of the Austin’s Minnesota High School Cycling League’s race at the new course next to Todd Park.

A group of cyclists pedaled north Sunday across a grass trail toward the Northeast Austin Power Plant before taking a sharp curve west into a wooded area toward the Cedar River. All the while, dozens of spectators cheered them on during Austin’s first Minnesota High School Cycling League race.

But for Austin’s cycling team and bike leaders, Sunday was more than just race day. It was the culmination of several months of hard work and community cooperation needed to prepare the new mountain biking trail west of Todd Park on land owned by Hormel Foods Corp. It was also a way to honor the memory of Dr. Richard “Dick” Schindler, who was vital in sparking Austin’s cycling team before he passed away in a mountain biking accident last October.

Gary Sjoquist, who co-founded the Minnesota High School Cycling League with Josh Kleve, praised the Austin community for its efforts in getting the trail ready in time.

“It’s just awesome,” said Sjoquist, a member of the Mountain Bike Hall of Fame. “The community really stepped up.”

Sjoquist visited the site in June and admitted he doubted Austin’s course would be ready in time for this weekend’s race. 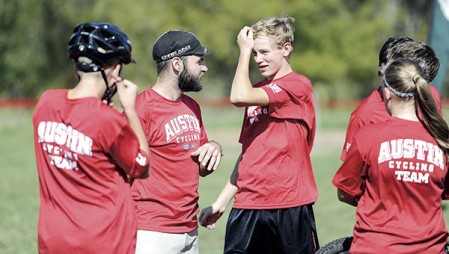 “The grass here was this tall,” he said holding his hand shoulder high. “And we walked around and I said, ‘Boy, it’d be great if you guys can pull this off.’ But as I was leaving I was thinking: No way; we’re going to have to schedule some other venue for this date.”

But several volunteers came together after the Fourth of July and worked diligently to get the trail ready. They had plenty of motivation. Several Austin team members and race organizers said they were proud to host the race as a way to honor Dr. Schindler’s memory, since it was his goal for Austin to host a race.

Belita, Dr. Schindler’s wife, said her husband likely would have loved the race and would have been one of the sweepers, who are adult riders who ride at the back end of each heat to help out the riders.

“Dick was real instrumental in getting it started, but look at all the people that made it happen,” Belita said. “I think he would have thought that was the coolest part.”

Salmon and other organizers were pleased with an estimated turnout of more than a thousand people — initial estimates called for 700 racers or more with coaches, parents and other spectators — for Austin’s first home cycling race.

The Austin course fits in well with the opening races of the league’s season. Sjoquist said the league schedules flatter, less technical trails early in the season when many young, new riders need to learn what it’s like to pace themselves and stay hydrated for races that last 30 minutes to an hour and a half.

“This is actually an ideal venue,” Sjoquist said. 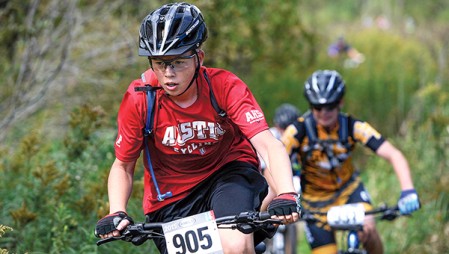 Austin’s Simon Hirst heads up a hill during the freshman and sophomore races Sunday afternoon at Austin’s Minnesota High School Cycling League’s race at the new course next to Todd Park. Photos by Eric Johnson/photodesk@austindailyherald.com

The league then builds up to harder courses that feature more climbing and obstacles. The last of 2015’s five races is scheduled for Oct. 25 at Mount Kato in Mankato.

Since Austin’s course is a good introductory site, it’s scheduled to host the first race of the 2016 season.

Space for the future

While dozens of tents and hundreds of bicycles filled an open field around the race staring line on Sunday, organizers were pleased that the course and staging area also featured plenty of open space for additional teams in future years, along with ample parking around the Todd Park Complex.

“This is a great, great venue,” Sjoquist said.

Salmon said the one criticism they heard about the trail was that it’s bumpy, but that’s largely because it’s new.

“Yes, it’s bumpy, because July 1, there was nothing out here,” Salmon said. “We have some work to do for next year, but kids are liking it. I think a lot of kids like it because it’s a fast course.”

Austin’s Timur Kritzer rides out on the course.

Sjoquist said the course itself is now a key amenity to the community.

“Austin just got a little bit more complete, because now there’s a mountain biking trail that kids and parents are going to be able to come and ride,” Sjoquist said.

But there’s more work to be done. Austin’s mountain biking trail is still private. Organizers first got temporary permission and trail status for the race. But Vision 2020 Bike/Walk Trail Committee Chairman Steve Kime plans to now shift the committee’s focus to getting the permissions and designations to make it a permanent and public trail.

Despite much work ahead, Kime — like the other volunteers — was happy to see their hard work culminate with Sunday’s race.

“It is just absolutely amazing,” he said.