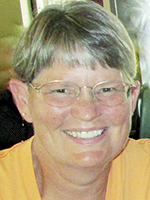 Val was born May 26, 1961, in Harvard, Illinois, the daughter of Ed and Carol Koch. At the age of 12 the family moved to a farm in rural Rose Creek, Minnesota. She was a 1979 graduate of Southland High School and earned a Bachelor of Science degree in Industrial and Physical Education from the University of Wisconsin-Platteville.

After being introduced by the milkman, Val married Ken Pitzen July 19, 1986. They made their home on a farm in rural Stacyville. Val began her career as director of the Rose Creek Summer Youth program, which turned into a 29-year career as recreation supervisor at the Austin Minnesota Park and Recreation. Some of her favorite programs that she started there were the summer track meet, the Youth Activity Center (YAC) and hosting the Minnesota State Volleyball tournaments. Val was also a referee for high school girls’ volleyball.

In addition, Val was an EMT with the St. Ansgar Rescue Squad. A lifelong tuba player, she brought Tuba Christmas to Austin. She was an avid softball player, playing in two national tournaments. Val shared her love of animals with school children and often invited people to the farm to see the wide variety of animals. She trained her own team of Belgian draft horses that she drove in numerous parades and events. Each Christmas she and Ken would deliver thousands of homemade cookies to many people. She was a loving friend, a prankster and generous to all.

Special thanks to Denise and Heidi for their care of Val.

To greet her in the next life are her two brothers: Douglas and Jeffrey; her grandparents; and her father and mother-in-law: Bob and Olivia Pitzen.

In lieu of flowers the family would prefer memorials, which they will designate at a later date.