Mower County’s rent has gone up substantially over the past few years, according to the Minnesota Housing Partnership.

The nonprofit released a report Wednesday showing rent had increased in 82 out of 87 counties in Minnesota, with Mower’s median rent increasing 35 percent since 2000, the second highest increase in Minnesota behind Big Stone County in western Minnesota.

About 28 percent of Mower County households rent their homes or apartments at a median cost of $695 per month, according to the report. Yet Mower County’s poverty rate means there are only 26 affordable and available rental units for every 100 low-income renters. 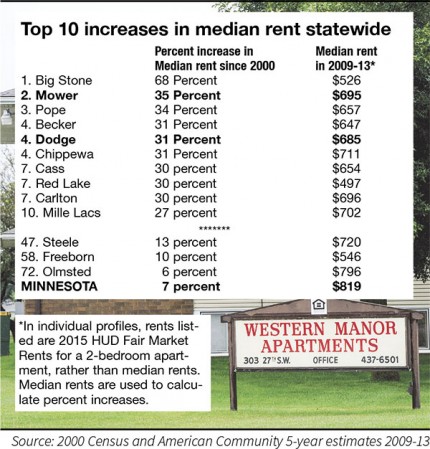 By comparison, median rents in Freeborn County only rose about 10 percent, to about $546 a month, since 2000. Rent in Steele County increased by 13 percent to about $720 a month during that period.

The report highlights massive issues with aging houses, a lack of new rental developments across the state and a growing need for more senior housing.

The information isn’t much of a surprise to area leaders, as local officials have increased efforts to secure more housing in the area over the past few years. The city has grown from 23,342 residents in 2000 to 24,719 residents in 2010.

A 2013 study commissioned by the Austin Housing and Redevelopment Authority showed the city needs more than 400 houses and apartment units to keep up with an increasing population by the year 2020, along with more than 350 housing units for seniors.

The city of Austin and the HRA partnered this spring to work with a private developer on a 38-unit townhouse development project in northwest Austin, which could start as early as next year. City officials have applied for tax credits for the project and will find out if the project is eligible for tax breaks in October, according to Erichson.

In addition, some area organizations have taken housing matters into their own hands. This spring, the Hormel Institute and Hormel Foundation revealed a 42-unit apartment complex will be built across the street from the Institute and will house incoming scientists as the Institute completes its latest expansion.

City officials have also joined lobbying efforts at the state level for more market-rate housing opportunities. Austin City Administrator Craig Clark testified before several Senate committees earlier this year on the need for more housing in Austin, and Sen. Dan Sparks, DFL-Austin, pushed for a new workforce housing office to give grants and tax credits to private housing developments across the state.