On average, Pacelli Catholic Schools students tested at or above average on the yearly North West Education Association Measures of Academic Progress, or NWEA MAP, test for the 2014-15 school year.

Now, Pacelli is continuing to use those test scores as a guide for student improvement.

But the scores are only part of process for Pacelli, which tests students multiple times a year to track individual progress.

“It also helps our teachers plan their instruction according to what their kids need,” Principal Laura Marreel said.

“A lot of schools in our diocese use this test to measure their growth, and I think, understanding that all kids are different, and they come from different backgrounds, different priorities at home, different education levels, we really value individual growth,” Marreel said. “So that’s what we strive to see with each of the tests we give kids.”

The students get their test scores right after the test is finished, and from that Marreel said students can make a plan for the next two tests. They work with teachers and counselors to set goals for the next test.

“We really focus on that growth each year,” Marreel said.

The tests are not the same among each student, as the questions adjust while the students take the test depending on their answer.

Each Pacelli class has around 20 students on average, which means one student’s score could make a big difference in the average score for that grade. Marreel said the main goal is that students will reach the 75th percentile or above. She said one thing that helps students achieve that is the student-teacher relationships, as well as the parent-teacher relationships.

Marreel said Pacelli’s students’ scores are above last year’s scores, which she guessed was due to the way administration analyzes the scores and makes decisions about programming and staffing needs based on those scores throughout the year. This year, the school added a staff member in reading and the after-school academy they have for help with homework, which Marreel said helped students. 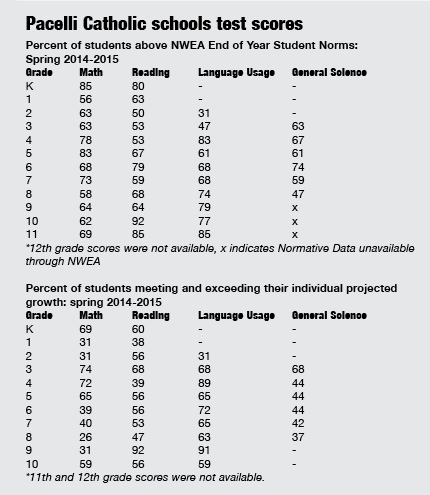