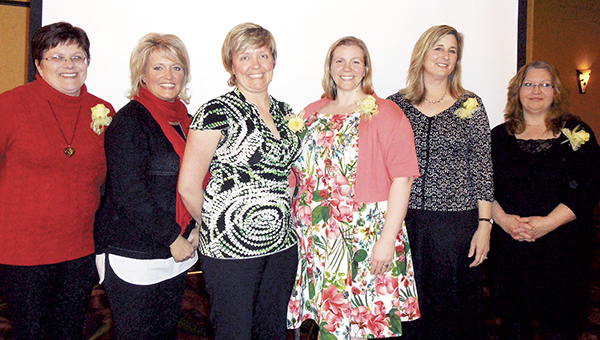 The Zonta Club of Austin held its fourth annual Woman of Achievement Banquet. 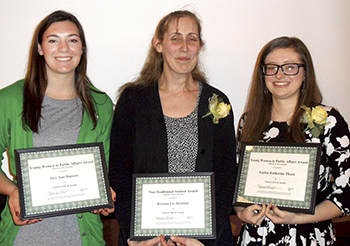 Alex Hansen (left), Kristina Hastings and Sophia Thoen were the 2015 scholarship recipients at the Zonta Club Woman of Achievement Banquet.

Money raised from the event helps the Zonta Club to continue giving out their scholarships, they celebrate Zonta Yellow Rose day and celebrate outstanding women in Mower County. The funds raised from the banquet go to the Zonta Non-Traditional Scholarship and YWPA (Young Women in Public Affairs), the Jane M. Klausman award and GED scholarships.

The guest speaker for the evening was Habiba Haji of Rochester. She spoke about her life living in Somalia, going to a refugee camp in Kenya and being drawn as a lottery winner to come to the United States through the Catholic Charities. Arriving in America at 16 and not knowing any English was a struggle for her, but she kept on and is now a nurse in Rochester. Her story was very interesting and made everyone appreciate all the opportunities there are every day.

Mary Goetz , Status of Women Chair, presented the awards for this year’s scholarships. Kristina Hastings was our Non-Traditional Scholarship recipient, and she is attending Riverland Community College. The Young Women in Public Affairs scholarship had two recipients this year: Sophia Thoen and Alex Hansen. Congratulations to the winners and best wishes as they continue their educational goals. 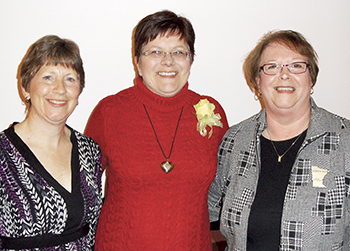 Cheryl Retterath introduced the 2015 Woman of the Year candidates. There were six candidates vying for the title and they were Lori Espe, Jana Gray, Gina Grundmeier, Rachel Knutson, Kristen Olson and Peggy Young. All of these women have contributed so much time and talent to make our community a better place to live. Gail Dennison, who was the 2014 recipient announced Gina Grundmeier as the 2015 Woman of the Year.