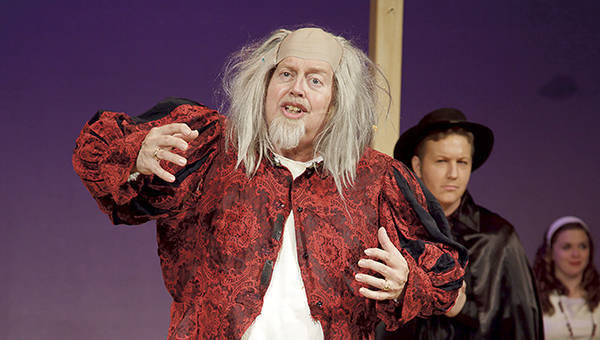 David Dahlquist played Henry in “The Fantasticks” in 2011 at Riverland Community College. Dahlquist loved theater and participated in many plays over the years. – Photos provided.

David Dahlquist had a strong passion for theater, and that passion spread like wildfire in Austin and Lyle.

Dahlquist, 72, of Lyle passed away Wednesday, March 18, 2015, at Golden Living Center East, Rochester. Friends will never forget Dahlquist’s passion for theater and the arts, or his work at Lyle Public Schools. 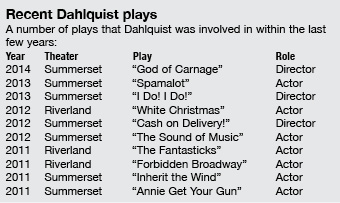 Dahlquist was heavily involved with Riverland, Summerset Theatre and Matchbox Children’s Theatre. He only missed one year working with Summerset — either as an actor or a director — since its start. And that one absence only happened because he was out of the country.

“He just loved theater,” Girton said. “He loved to direct; he loved to act.”

Dahlquist acted in many Riverland plays under the direction of Girton and current theater director Lindsey Williams, who guessed Dahlquist was involved in at least 75 to 100 plays.

Dahlquist loved a variety of dramas and plays, but Girton recalled his love for British comedies.

“Whether it was musical or drama or comedy, he really had a fascination with British comedy,” he said.

“Everyone will remember him fondly and remember all the work that he put in,” Girton added. “And the funny characters he had and the serious characters. Just how much he loved being there.” 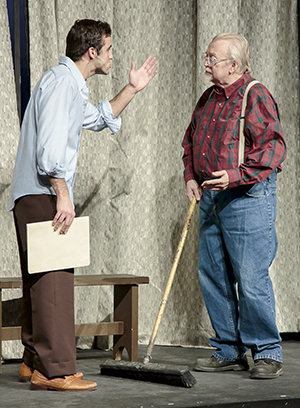 David Dahlquist (right) and Tiago Ferreira perform in “White Christmas” in 2012 at Riverland Community College. Dahlquist participated in and directed many plays over the years.

One of Dahlquist’s passions with theater was reading scripts. Girton said Dahlquist likely knew more about scripts than anyone else working with the groups, and Dahlquist loved getting a hold of the new scripts and seeing what was good.

Longtime friend Penny Kinney — who performed many Summerset shows with Dahlquist after meeting him in 1969 — recalled going to Dahlquist several times to ask if a script was good to use.

“He had a great influence on the theater,” she said. “He was a great reader and we all respected his opinion. … He read constantly, so we would go to David if we wanted an opinion on the quality of a script.”

Kinney also said Dahlquist’s French skills helped with scripts that required a translation. She said Dahlquist was largely responsible for getting Lyle Public Schools to bring a busload of students to Matchbox plays each year for about 30 years.

“He was somebody who was a lover of the theater and a community participant,” Kinney said.

A lifetime of teaching

Friends also remember Dahlquist for his commitment to Lyle Public Schools. After retiring in 1999, he continued to work in the district, serving as the Lyle schools’ state test coordinator and volunteering his time reading to elementary students.

Friend Janet Anderson — who met Dahlquist around 1975 and worked with him in Summerset and Matchbox — recalled Dahlquist’s commitment to his former career.

“He got hired to teach and then he stayed there his whole teaching career,” Anderson said.

Kinney noted Dahlquist always gave of himself, whether it was reading to elementary students or helping out with a play.

“He’s just always been a very giving sort of person,” she said. “Very involved in the theater and very involved with his friends. And just a great person, enthusiastic.”

Dahlquist fought through several illnesses over the past few years, but he never gave up what he loved because of it.

“He didn’t give up, especially in his illnesses,” Kinney said. “He just never gave up.”

Girton recalled Dahlquist suffering a heart attack while directing a play, but it didn’t slow him down much.

“He was only at the hospital for a few days,” Girton said. “And then he was right back at the theater directing.”

Girton remembered driving to pick up Dahlquist for a while, because he wasn’t able to drive but still wanted to be involved. Girton said Dahlquist taught everyone around him how to work hard and still have fun.

“I think he taught them about having fun and working hard,” Girton said. “He had a great sense of humor but he always got his work done. Whatever was expected of him from the director, he would bring it.”

‘We’re just going to miss him’

Anderson recalled her friend’s other hobbies, such as playing the organ and being the choir director at Our Savior’s Lutheran Church in Lyle. Dahlquist was very active and proud of his Norwegian heritage, participating as a member in the Sons of Norway group and doing hardanger embroidery. He even visited Norway a couple of times. He also enjoyed cooking, painting with watercolors, quilting, and he served on the Summerset Theatre Board of Directors. In 2013, Summerset Theatre recognized David for his 45 years of service.

“David was gentle, a nice person,” Girton said. “He was kind to everyone. I don’t think I ever heard him say a bad word about anybody.”

Dahlquist had a big influence on those who acted under and with him in various plays.

“The kids really liked working with him,” Girton said. “He was a really solid anchor when he was in a show because he worked so hard at it.”

Anderson said even if Dahlquist wasn’t involved with the play, he would come and watch to show his support for the actors and director.

“We’re just going to miss him a lot,” she said. “He was a good friend and so passionate about theater, and so supportive.”

Get ready for eggs, a bunny and great food this weekend, as Easter hits Austin. Collect eggs, eat brunch and... read more