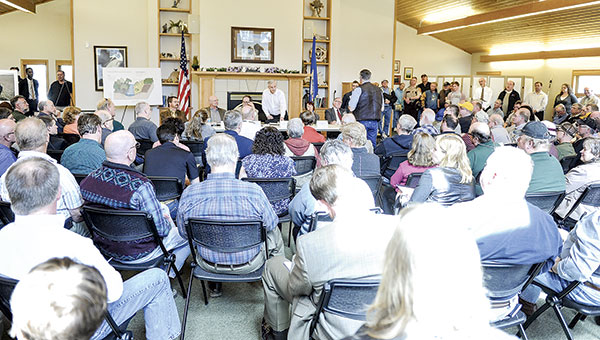 The Ruby Rupner Auditorium at the Jay C. Hormel Nature Center was filled to capacity Thursday afternoon as Gov. Mark Dayton held a forum on his proposal to add water quality buffer strips to ag land. Photos by Eric Johnson/photodesk@austindailyherald.com

Gov. Mark Dayton stopped in Austin Thursday to hear solutions from farmers and landowners alike on a proposed water quality bill to add more buffer strip land throughout the state.

Under a bill before legislators, landowners would have to install at least 50 feet of perennial vegetation — also known as a buffer strip — to help filter phosphates, nitrates, sediments and other potential pollutants from water running into the state’s rivers, lakes and streams. 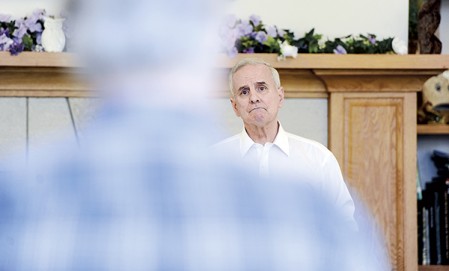 Gov. Mark Dayton listens to a speaker during Thursday’s forum.

Dayton, along with various local and state officials, told the audience the proposal is meant to stem increasing water pollution concerns, especially after a recent Minnesota Pollution Control Agency report showed all but one out of 97 streams weren’t suited to drink or to use in water activities.

Dayton’s proposal would add about 125,000 acres of buffer-stripped land throughout the state. Though there are several exceptions to the bill — beaches would be exempt from the buffer strip requirement, for example — some landowners and farmers were concerned the legislation would provide a one-size-fits-all solution to a complex problem.

Mark Novak, a farmer near Wells, Minnesota, said he already had about 33 feet of buffer strip lining his land near the ditches.

“With 33 feet, very little water from my land is going into the ditch,” he said. “You want me to add another 15 feet?”

“I simply believe that one size does not fit all,” he said.

Yet farmers disagreed over whether buffer strips were necessary. One farmer said buffer strips on his land had helped filter rain water on his property since the 1970s, while another farmer said the government was, in essence, stealing several acres of his land that could be used for crops.

Mower County Farm Bureau President Marlin Fay called on Dayton and state officials to slow momentum on the bill until more research could be done, but Dayton said he would stand firm on getting water quality solutions like the buffer strip bill passed sooner than later. 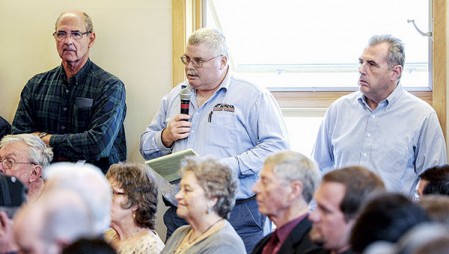 “The fact is, things are not getting better, they’re getting worse and more polluted,” Dayton said.

After the meeting, Dayton said state officials could look into several measures proposed by the audience, which included more funding for soil and water conservation districts and reduced taxes on buffer strip land.

Richard King, who owns farm land near Windom Township, said he supported the buffer strip proposal as well as a negative tax for the subsequent acres affected by the bill.

“If you put a negative tax on the buffer zone, they’re going to go for it more,” he said.

Dayton stopped in Worthington as well Thursday to discuss the proposal. Lawmakers will debate Dayton’s measure, as well as several other environmental proposals, over the next few weeks.