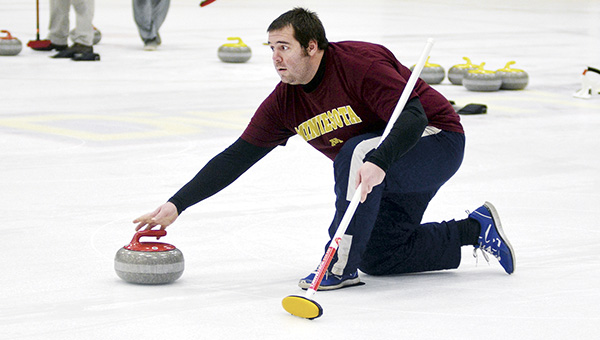 It’s been a year since Guy Minnich wanted to bring a curling club to Austin, and he’s finally got his wish.

The Austin Curling Club is fully operational at Riverside Arena and it meets at 6 p.m., Monday nights. The club includes a lot of inexperienced curlers, but they’re all willing to learn the sport.

“It was a little bloody on our first night,” Minnich said. “We had a split chin and a split eye, but everybody wanted to come back and try it again.”

The club has around 20 members and there is room for a total of 98 curlers if a second night is added to the schedule. The club will continue to meet on Monday’s as long as there is ice at Riverside.

Last year Minnich hosted a session on learning to curl and that helped generate interest for the club. He said there are curlers ranging from age 19 to 74 competing. 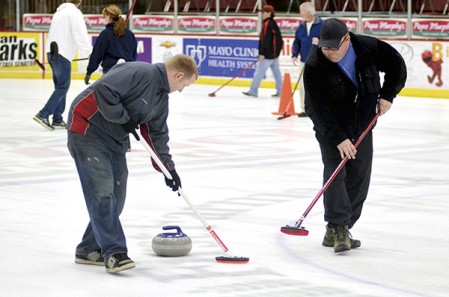 Minnich hopes this year will build up enough momentum to have a bigger league in the Fall.

“We’re just getting everybody really familiar with curling,” Minnich said. “People in the spring league will be out in the community doing the advertising for next fall. Next fall will be our big push.”

Minnich is a certified instructor and he has four experienced curlers helping him with training. Minnich, who has a hockey background and started curling a few years ago, said that curling continues to be a fast growing sport and he’s glad to help locals learn it.

“It’s been a blast,” Minnich said. “What’s fun to watch is the excitement people have about it when it’s their first time doing it. To see that in their eyes is what keeps me going.”

Anyone interested in joining the Austin Curling Club can show up at any of the Monday sessions and give it a try.