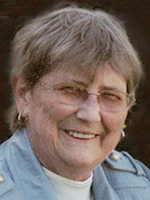 Christina Marie (Rudebeck Lane) Schocker was born on June 16, 1943, in Fairmont, Minnesota. She was the daughter of John and Lucile (Small) Rudebeck. Her father passed away shortly before Chris was born and she was later adopted by Hayden Lane. Chris attended school in Fairmont and Granada and graduated from Granada High School in 1961. She furthered her education at Mankato State University.

On May 4, 1965, Chris was united in marriage to Billy L. Schocker in Austin, Minnesota. The couple resided in Austin and Albert Lea. Chris and Billy shared over 35 years together before Billy passed away on Feb. 12, 2001. After Billy passed away, Chris moved to Fairmont.

Chris worked as a typesetter and page layout artist for the Fairmont Sentinel, Austin Herald, and Albert Lea Tribune. She helped start and was the managing editor of the Ellendale “Our Community News.” She also worked at Fairmont Railway Motors for a short time. Chris continued her work until her retirement in 2001.

Chris was a member of First Congregational United Church of Christ in Fairmont. During her free time she enjoyed painting, sewing, motorcycles and snowmobiling. She also loved traveling to England to visit her good friends Bob and Linda Connell, and tour cathedrals and other historic places. Chris loved her many pets through the years and had a special place in her heart for anything with four legs and fur.

Along with her parents, Hayden and Lucile Lane, Chris was preceded in death by her husband, Billy Schocker; brother-in-law, Dewaine Schocker; and sisters-in-law: Eleanor Klingbeil, and Edna Schocker.

Funeral Service for Christina will be 2 p.m. on Friday, March 20, 2015, at First Congregational United Church of Christ in Fairmont with interment in Lakeside Cemetery in Fairmont. Visitation will be 5 to 7 p.m. on Thursday, March 19, at the Lakeview Funeral Home in Fairmont and will continue one hour prior to the service at the church on Friday. Chris passed away on Monday evening, March 16, 2015, at Lakeview Methodist Health Care Center in Fairmont. The Lakeview Funeral Home and Cremation Service in Fairmont is in charge of arrangements. For more information, visit www.lakeviewfuneralhome.net.

A local taste of Austin heads to the movies; Foodie Throwdown is Saturday

Josh Diaz cuts beef brisket during the Foodie Throwdown last year at the Hormel Historic Home. Diaz is one of... read more