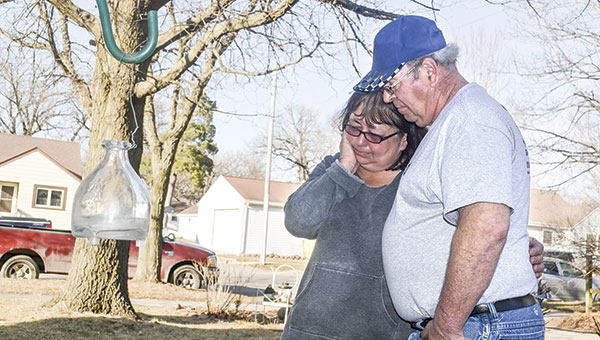 Marsha and Gary Wilde look over three stone monuments dedicated to their children and daughter-in-law, who have all passed away, during the reveal of T ‘N G Plumbing’s Pay It Forward bathroom renovation project Friday. Volunteers went above and beyond a bathroom remodel to help spruce up the Wilde home. Trey Mewes/trey.mewes@austindailyherald.com

As Marsha Wilde stopped to look at her transformed attic upstairs, she put her hand to her mouth and looked around at the results.

“It’s safe to come up here again,” she said.

Marsha and her husband, Gary, feel like they have a new lease on life after a home renovation project sponsored by T ‘N G Plumbing, the second annual Pay It Forward Project.

Todd and Gina Grundmeier, the owners of T ‘N G Plumbing, have put together the Pay It Forward contest to help families in need remodel their bathrooms as a way to do something nice for others. They knew about Gary and Marsha last year when the Wildes’ daughter, Katie, nominated her parents for the renovation project.

“They’ve been through so much and have been so strong,” Gina said in January. 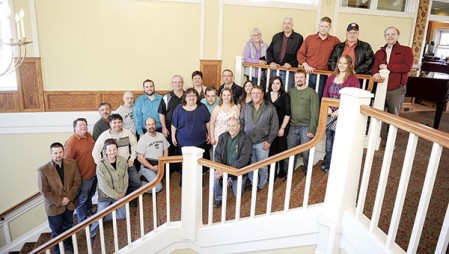 All those involved in T ‘N G’s Pay it Forward have their picture taken with this year’s recipients, Gary and Marsha Wilde, Saturday at a banquet at the Austin Country Club. Eric Johnson/photodesk@austindailyherald.com

Gary and Marsha have dealt with several tragedies over the years. Their son, Shane, committed suicide at 15 years old after he was repeatedly bullied at school. Another daughter, Misty, killed herself on her 35th birthday. And just last year, the Wildes lost their daughter-in-law, Amy Mueller Wilde, to cancer.

Through it all, the Wildes have maintained a positive nature, and their story resonated with Gina, whose family has also dealt with suicide-related issues.

That’s why all last week, Todd and Gina along with dozens of volunteers from local companies, helped to completely redo the Wilde home’s bathroom. Before the renovation, the bathroom was in poor shape. The floor was “spongey” according to Gary, and had suffered so much water damage that it could have collapsed.

Enter T ‘N G, along with several local companies such as Austin Electric, Y Waste, Wagner Construction and more. The volunteers completely redid the bathroom, helped paint some of the home’s walls, replaced the home’s plumbing and even donated a new furnace and water softener.

Gary could tell how much work had gone into his home before he even got into his basement.

“It was completely redone,” he said with a laugh.

Yet volunteers also had a few sentimental surprises for Gary and Marsha. They added a shelf to the living room and reframed many of the Wilde family’s photos to improve Marsha’s “Angel Wall.” They also helped create space for a play area in the attic, where Shane’s bedroom was, so Gary and Marsha’s grandchildren have their own play space.

Perhaps the best surprise of all was three stone plaques dedicated to Shane, Misty and Amy alongside the home, to honor their memory. 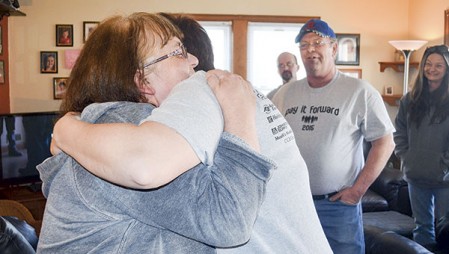 Marsha Wilde gives Gina Grundmeier of T ‘N G Plumbing a hug Friday at the end of T ‘N G’s Pay It Forward bathroom remodel project. Marsha and her husband, Gary, in the background, received a bathroom remodel, all new plumbing and more as part of the project.
Trey Mewes/trey.mewes @austindailyherald.com

For Gina, the effort shows how willing the community is to come together behind people. She honored the Wildes and all of the businesses Saturday at a banquet at the Austin Country Club, where she also unveiled two $500 donations to the Parenting Resource Center and suicide prevention group NAMI in Shane and Misty’s name.

“I spent hundreds of hours coordinating … calling up businesses and asking for donations, and they all said ‘What do you need?’” she said. “It’s just such a rewarding experience.”

For the Wildes, the experience is transformational. It helped to bring a little healing back into their lives and, as Katie said, put a smile on her parents’ faces once again.

“I feel like I have my parents back,” she said.

The Lyle-Pacelli girls basketball team passed through Austin Saturday on the way to a welcome home celebration in Lyle. The... read more