The flow of Austin’s music; Austin schools experiencing an influx of band students 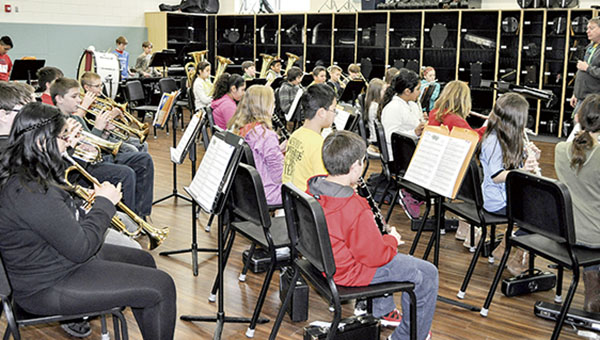 One of the sixth-grade band sections practices “When the Saints Go Marching in” Friday morning at I.J. Holton Intermediate School. There are several sections of both fifth- and sixth-grade bands due to the increasing number of students and limited space and one-on-one teacher/student time. Jenae Hackensmith/jenae.hackensmith@austindailyherald.com

Austin Public Schools is filled with music, and that doesn’t look to be slowing down anytime soon.

The district’s band program has grown rapidly in recent years, and the directors are trying to keep up. Today, 542 students participate in band in grades fifth through 12th, compared to 415 students a little more than two years ago, according to Austin High School Band Director Bradley Mariska. 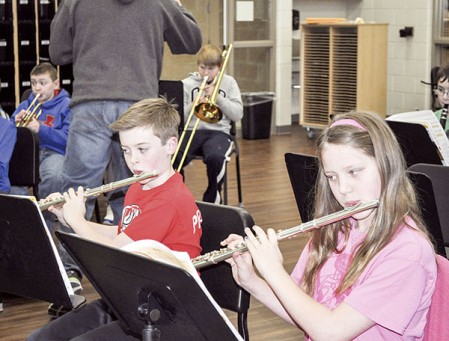 Austin Pelletier and Piper Kellner play flutes as one section of the fifth-grade band at I.J. Holton plays Old McDonald Friday morning in the band room. Director Tim Davis had the students clap the melody first, and then play the notes before playing the song. Jenae Hackensmith/jenae.hackensmith@austindailyherald.com

“It’s really the philosophy of all three of us that we wanted to grow that program,” Mariska said. “Making sure we’re retaining students who are already in band … but also seeing more students just join band from the very beginning.”

Although gaining students for the program is a good problem to have, the directors wonder what could happen if the numbers continue to grow — which looks likely.

“We’re experiencing more than we’ve ever had of kids in the school district,” Davis said.

Mariska noted the band had little diversity when he first came, and students from several community segments didn’t participate, due to either cost or because the family had never participated before. The directors hoped to make it possible for any student to join, which prompted instrument donation drives to help get instruments into more hands.

One of the biggest initiatives the band directors implemented was the mindset that the bands from each school are all part of one large program. 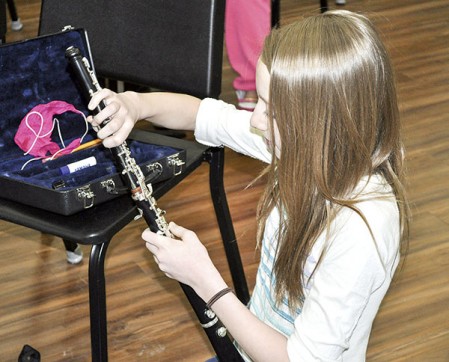 “I think we’re really well in line with each other as far as our music education philosophy,” Davis said. “And so we understand the importance of helping each other.”

The directors hope students stay in band from year to year and the program is designed to work with them through grade transitions. Tarara noted band kids can also participate in jazz band, pep band, marching band, and the solo and ensemble festival.

“One of the things we’ve tried to do is try to provide a lot more opportunities for the kids,” Tarara said.

Tarara noted when younger students see the outside programs band members are involved in they want to be a part of that as well.

“We’re experiencing growth from the beginners, but also kids are staying in [band],” Davis said. “They’re choosing to continue their music studies through high school.”

Tarara said it’s good that students feel successful with their instruments, but the growing number comes with some concern.

“Ideally we just want to make sure that [we’re] able to still provide the quality instruction for the kids,” Tarara said. 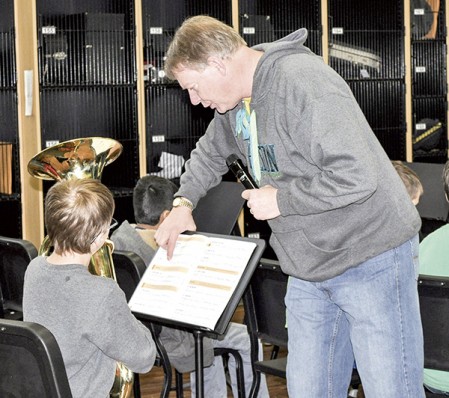 Director Tim Davis points out a place in Carter Gilster’s music book as one section of the fifth-grade band at I.J. Holton plays Old McDonald Friday morning in the band room. Davis had the students clap the melody first, and then play the notes before playing the song. Jenae Hackensmith/jenae.hackensmith@austindailyherald.com

The high school band is split into two classes, and Mariska said it’s likely to split into three for next year. Ellis also has two bands, and I.J. Holton is split into seven sections. The small groups at I.J. Holton have grown as well, making it difficult to give students individual attention.

“One thing we’ve always been really proud of … is there’s a long tradition of a great music program, band, choir, orchestra, and we don’t want to see that reputation slip,” Mariska said.

Educational Services Director John Alberts said it is wonderful to see so many students participate in the band program, and it speaks to the strength of the program and the staff the district has.

He noted, as with all school programs, the numbers of students is monitored to ensure the quality does not dissipate and the students get all they can from the music programs.

“We just want to make sure that people are thinking long term down the road,” Mariska said. “As far as we can see the next couple of years, the numbers are going to continue to grow.”

Live up the wild west