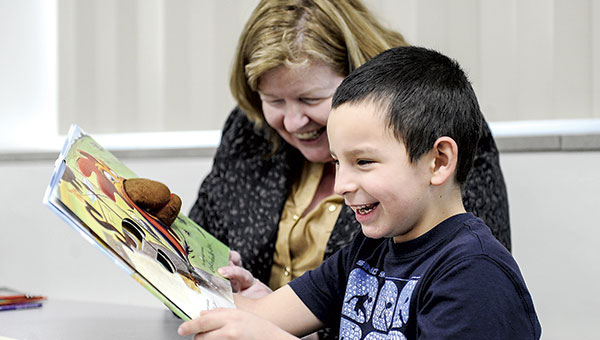 Woodson Kindergarten Center student Enrique Yepez giggles as he reads along with Hormel employee Marianne Pollack Tuesday afternoon. Pollack is part of about 60 employees that read to students once a week for 30 minutes with the organization Everybody Wins Minnesota. Photos by Eric Johnson/photodesk@austindailyherald.com

Five-year-old Amelia Moore pointed excitedly to the word “hello” and said she recognized the letter “H.”

“I know this one,” she said to her adult reading buddy, Katie Larson.

Larson is one of 60 Hormel Foods Corp. employees who gives up her lunch period every Tuesday to take a school bus to Woodson Kindergarten Center and read to her student buddy. The effort is a partnership between the school and company through Everybody Wins Minnesota.

For 5-year-old Axel Larsen, reading books with his buddy has been a blast. One of his favorite books to read has been “A Stormy Day.”

“Because I liked it,” Axel said.

Axel’s adult reading buddy is Matt Thimjon, who works in the internal audit section at Hormel.

“One thing I really look forward to is just the excitement, the passion in these kids,” Thimjon said. “Just that, you know you walk into the school and they’re looking forward to their reading buddy, and then just to see that smile on their face.”

Woodson Principal Jessica Cabeen worked with Larson to bring the program to Austin, even though Everybody Wins organizers were hesitant to work outside of the Twin Cities area.

“Initially the organization was concerned because they said Everybody Wins is something that works with students of diverse backgrounds, and a lot of different demographics and socioeconomic populations,” Cabeen said.

After explaining the 45/15 classes at Woodson, and discussing the diversity at the school, the organization agreed to take the chance in Austin. The six-week program kicked off Jan. 27 and will run through March 3. The program has been a big hit for both students and readers.

“This is the highlight of my week just to spend this time with my student,” Larson said.

“It’s a great opportunity to spend one-on-one time with a child,” she added. “And to see their excitement for reading and to have that attention, it’s been really rewarding.”

Thimjon has also seen the effect on young readers.

“There’s just so much excitement of just the volunteers and the readers,” he said. “It’s difficult to leave after that 30 minute reading session.”

Cabeen first worked with Everybody Wins when she was a teacher in St. Paul Public Schools about 12 years ago.

“I really found that to be a powerful tool when I was teaching in St. Paul and have been really passionate about trying to get this to come to Austin to try and meet the needs of our kids here,” she said.

Cabeen has high hopes for the future of the program and hopes to spread the word so more opportunities are created. The program has made an impact on the students who are very eager to see their buddies each week. 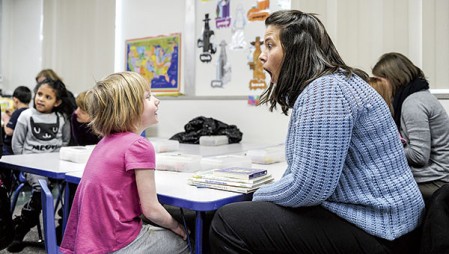 Marcene Sonnek reacts as Woodson Kindergarten Center student McKenzie Sletten brings her up to speed on what’s happened since the last time they were together.
Eric Johnson/photodesk@austindailyherald.com

“It’s just making connections with kids,” Cabeen said. “I think we take for granted the fact that a number of these kids have parents that work, that might be working out of town, and just getting 20 minutes one-to-one with an adult once a week is priceless, and the relationships that have already been established in this short amount of time, its incredible.”

She is also excited to give the students more exposure to careers they could pursue. Many times younger students only see teachers or school staff, and she said this helps them find other opportunities for their future.

“It’s going to just impact these kids not only for these six weeks but for years to come,” Cabeen said.

She hopes the students not only learn to appreciate literature, but also learn how they can make a difference.

“Making a difference in the community doesn’t take money and it doesn’t take a ton of time,” Cabeen said. “It just takes a small investment, a willingness to try something outside of your box.”

The flow of Austin’s music; Austin schools experiencing an influx of band students

One of the sixth-grade band sections practices “When the Saints Go Marching in” Friday morning at I.J. Holton Intermediate School.... read more