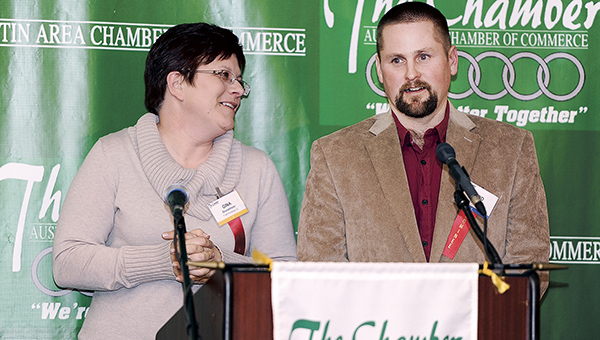 Todd and Gina Grundmeier accept their award after being named Business of the Year during the annual Chamber Banquet Thursday night at the Holiday Inn Convention Center. Eric Johnson/photodesk@austindailyherald.com

When Todd and Gina Grundmeier started their Pay it Forward fundraiser, they just wanted to help people the way people helped them when their home burned down in 2010.

“We didn’t do it for the recognition,” Todd said. “We did it because it was the right thing to do.”

That still didn’t stop Todd from admittedly feeling weak in the knees when his company, T ‘N G Plumbing, was named the 2014 Business of the Year at the annual Austin Area Chamber of Commerce banquet Thursday at the Holiday Inn. 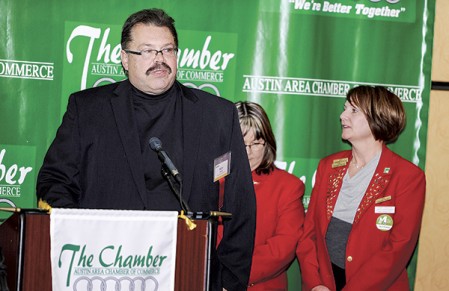 “It’s been a real honor for us,” Todd told the audience. “Thank you very much.”

Retail store Runnings was also honored as the 2014 New Business of the Year, and Cedar Valley Services won the 2014 Project of the Year with a $1.3 million addition to its main office.

The Grundmeiers dealt with a house fire shortly after Todd and Gina opened their own plumbing and HVAC business. Yet they felt called to help other people who were in tough circumstances by remodeling bathrooms and helping with other home repairs.

Last year, Jason and Shannon Ferch were selected as the first Pay It Forward family to receive a bathroom makeover, which came in at over $25,000 in donated parts and labor.

T ‘N G and area contractors redesigned Jason and Shannon’s bathroom to allow Jason, who is handicapped to have more space to use the facilities.

In addition, everyone involved also went above and beyond for the family. They helped paint Jason and Shannon’s kitchen and replace the family’s water heater, water softener and patched some faulty electrical wiring.

The Grundmeiers will lead another round of remodeling for a family in mid-March.

“To be recognized by your peers like this … it’s humbling,” Gina said. 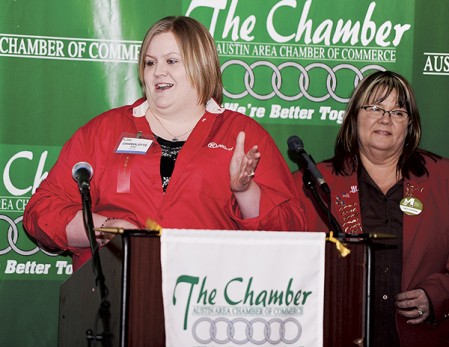 Charolotte Sitter, from Runnings, accepts the New Business of the Year during the annual Chamber Banquet Thursday night at the Holiday Inn Convention Center. Eric Johnson/photodesk@austindailyherald.com