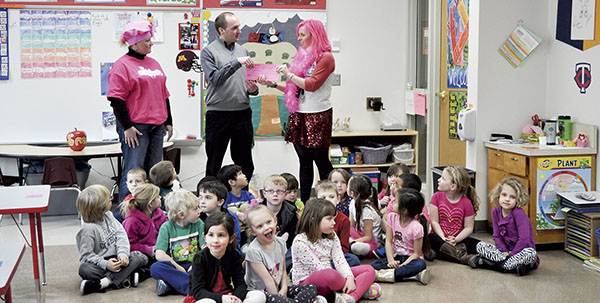 Woodson Kindergarten Center students got a new look at their principal Friday when she dyed her hair pink. 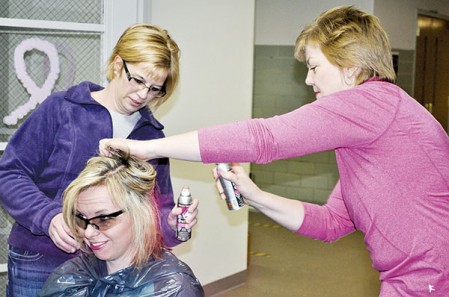 “We really challenged them this year to give as much as they could, and if they raised a certain amount — which was $1,000 — the pink hair would happen,” Cabeen said.

She was excited to see the students — with some help from parents and staff — raise well over the $1,000. Last year, the students raised about $800 through the penny drive.

“With 4-, 5- and 6-year-olds, [it’s] just unbelievable,” Cabeen said. “The amount of giving that these kids are willing to do at such a young age really makes us all feel happy about what we’re bringing our community.”

The drive focused on pennies, but it also collected other coins, some cash and checks. Cabeen was glad to see so many students eagerly participate in the drive. Even if they only brought in ten pennies, she said the students were very excited to donate them.

“A lot of our kids don’t have much, but they gave what they could,” she said. 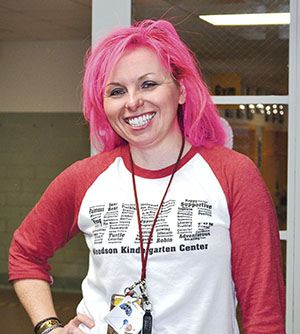 Cabeen has been happy to be a part of Paint the Town Pink these last three years, and she doesn’t foresee it ending any time soon.

“We really wanted to be a part of our community,” she said. “And this was just a great way for us to do that because the Austin community’s given Woodson so much — including new spaces within the last few years — that this is our way of giving back.”

“[Cancer] hits all of us,” she added. “When we talk with the kids here at school many of them have had stories of having cancer affect their lives even at this young of an age, so it’s nice to be able to give something and make it really meaningful for them.”

As for her pink hair, Cabeen said she didn’t know whether the students or the parents enjoyed it more. She had it done before school to ensure the most people got a glimpse of it while she helped students get off the buses.

Bruins move into first place with win over Brookings

The Austin Bruins moved into first place in the NAHL Central Division with a 7-1 win over Brookings (16-20-8 overall)... read more