Boys basketball: Packers shoot the lights out in win over Huskies

The Packers showed exactly how good they can be in their final regular season contest as they came out on fire in a 72-44 win over Owatonna in a boys basketball game in Packer Gym Friday. 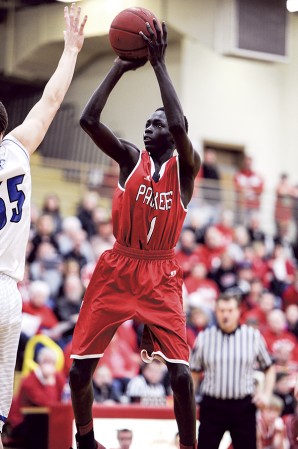 Austin’s Both Gach gets a look in the lane during the first half against Owatonna Friday night in Packer Gym. Eric Johnson/photodesk@austindailyherald.com

Austin sophomore Oman Oman had all 10 of his points in the first half as he went 3-for-3 on 3-pointers.

“It just kind of came for me,” said Oman, who also grabbed five rebounds. “I’m feeling pretty confident and the seniors have helped us out this year.”

Gach Gach played a strong all-around game for Austin as he tallied 13 points, six rebounds, four steals and three assists and his little brother Both Gach added nine points. Both hit back-to-back threes in the middle of a 22-3 Packer run to put Austin up 29-11 with 6:45 left in the first half.

“We were shooting the ball real well,” said Both. “We wanted to get a run going before the section tournament. If we play like we did today, we’ll be pretty good.”

Austin’s Oman Oman hefts a three-pointer from the wing in the first half against Owatonna Friday night in Packer Gym. Eric Johnson/photodesk@austindailyherald.com

“We were jumping passes defensively and offensively we just shot the lights out,” Fadness said. “The ball movement was really good and the energy was really good. The thing to learn from it is when you’ve got positive energy going on the floor, it’s really easy to shoot the ball. The first half was about as good as we could play.”

Gach left the game late in the second half with an ankle injury and did not return. Fadness is hopeful that he can recover in time to play in the postseason. Austin will open the Section 1AAA tournament in Packer Gym 7 p.m. Wednesday night. The Packers will likely host Kasson-Mantorville or Winona.

“He’s our best player and we do a lot of things through him, but at the same time we can with without him,” Fadness said. “The bottom line is it’s a sprained ankle and if Gach can ice it this weekend, stay off it and play in some pain, he’ll be able to go. I’m going to expect him to be playing Wednesday night.”

Austin’s younger players stepped up on Friday as players who were sophomores or younger combined for 24 points. Fadness hopes that’s a sign of things to come for his team.

“Tonight their energy was really good and they played with a lot of confidence,” Fadness said. “If they can do that moving forward that would be great. The problem is we’ve been inconsistent all year. Hopefully we can understand what we did tonight, learn from it and come back with some positive energy on Wednesday.” 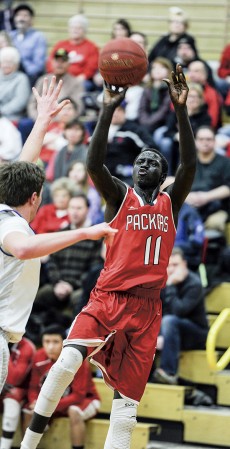 The Packers Gach Gach puts up a fade-away as Austin took on Owatonna Friday night in Packer Gym. Eric Johnson/photodesk@austindailyherald.com