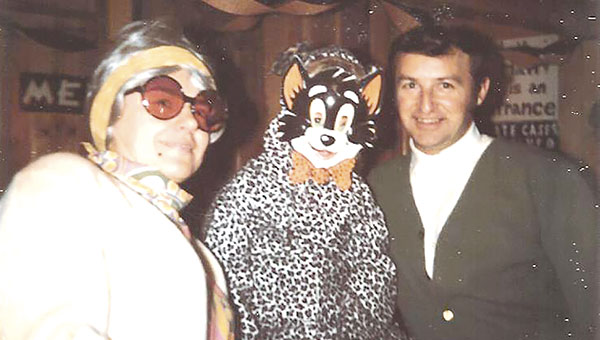 Delmer Staples, right, stands with two friends during a costume party at the roller rink. Delmer owned the rink from 1970 to 1976. Photo provided

In the mid-1950s, poodle skirts were all the rage, the Korean war had just ended, and people loved to roller skate.

Mark Staples built Mark’s Roller Rink in Brownsdale in 1955. In 1956, it burned but was quickly rebuilt. In 1970, it changed hands to Mark’s son, Delmer Staples, and was called Del’s Roller Rink. In 1976 it changed hands again, and after one more sale later on it is now known as the Rohler Rink.

On Dec. 3, 2014, Delmer passed away, and his son Scott Staples is holding a memorial skate at 7 p.m. on Saturday at the Rohler Rink to remember both Mark and Delmer Staples.

“My grandfather built the rink, dad took it over, and so many people grew up knowing both of them,” Scott said. “And I want that celebration to honor both of them.” 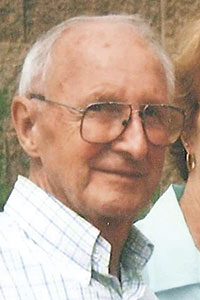 The celebration is open to everyone — even if they no longer skate — and Scott only asked that people bring memories to share.

“There were a lot of kids that skated there Friday night, Saturday, Sunday,” Scott said. “They made an impact on a lot of kids’ lives from Albert Lea to Austin.”

Reunion skate members will get a discount on rentals and the entrance fee. There will be a place for donations which will go toward the local food shelf. Scott said he has had many people respond to the invitation on Facebook and he hopes many people will show up, even if they no longer skate.

“I don’t care if you’re a grandma or a great-grandma, bring your kids, bring your grandkids, and enjoy some memories from when we grew up,” he added.

Memories of the rink

Currently living in Elko, Minnesota, Scott plans to reintroduce himself to many attendees, although he said he will probably know who everyone is once reintroduced.

Beverly Staples, who was married to Delmer when he owned the rink, recalled the many kids who skated during the time she and Delmer owned the rink. She said they treated all the children as their own, and the only discipline ever needed was the threat that they couldn’t come back the next weekend. After that, they were model kids.

“When I happen to run into any of those kids now and see what great adults they turned out, it makes me so grateful,” Beverly wrote in an email to the Herald.

When the rink was built, it was one of the largest rinks in the area, according to Scott. But it wasn’t the only rink. Scott’s grandfather Mark also owned rinks in Waseca and Dodge Center. Those rinks are now gone, but Scott remembered helping his grandfather run all three businesses.

While visiting the Waseca rink in 1973, Scott met his wife, Kim, and they’ve been together about 40 years.

The Brownsdale rink is the only to survive, and it too holds many memories. 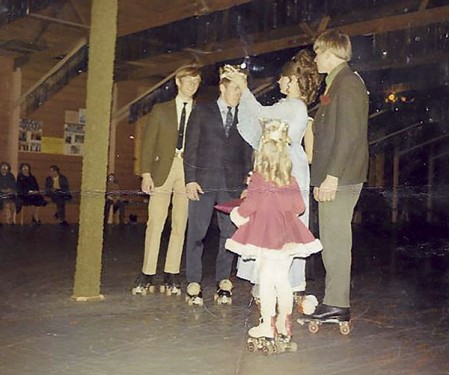 A boy gets crowned king at the king and queen roller-skaters contest. The event was held every year and contestants were judged on skating, personality and other aspects. Photo provided.

Scott recalled many things happening at the roller rink; it’s where his parents first met, where anybody who was anybody skated every weekend, and there was the annual king and queen roller-skaters contest.

“Today’s generation doesn’t know the fun we had there,” Scott said. “We spent our weekends at the roller rink, and we had a hell of a lot of fun.”

A busy time at the rink

The roller rink had a reputation for its king and queen roller-skaters contests. Many remember the formal attire with girls in dresses and guys in suits and ties. There were local celebrities for judges, such as newscasters. The event was always held around Valentine’s Day, and it was one of the busiest times at the rink.

Each skater got a number and would be judged on things such as personality, skating ability, dress and others.

“My grandfather, bless his soul, it was the only time he ever wore a suit,” Scott laughed.

The winners of the contest would get trophies, and Scott recalled 1969 when he won junior king.

“So I’ve got my little crown on my head and my trophy in my hand and standing there proud as a peacock,” he laughed.

Beverly recalled making boutonnieres and corsages, getting the trophies, the robes, photographers, newspapers and judges all lined up for the event. She said it was both the best and worst time of the roller rink, as it was very busy.

That wasn’t the only busy time, though. Beverly recalled Delmer working hard every day, keeping the buses repaired and clean, keeping up the building, and even sealing the floor.

If asked when they owned it if she enjoyed it, she’s not sure how she would have answered. But looking back, she loved the roller rink and was glad at the contribution she and Delmer made.

Many also remember the buses that would come from Austin, Albert Lea and other local places to drop off skaters. Scott recalled both his father and grandfather running buses to pick up kids. Beverly noted it took a lot of work to bring everyone back and forth, and many times bus drivers from the schools volunteered to help. She said it would have been impossible if the whole town of Brownsdale and outside towns hadn’t been behind them. Although the town was with them, the weather didn’t always cooperate with the skaters’ plans.

Scott recalled one blizzard that trapped about 300 kids at the roller rink in the early 1970s. He remembered Delmer and Beverly making sloppy joes and keeping the rink open for an all-night skate.

“It wasn’t planned but that’s what they did to keep the kids safe,” he said.

Scott recalled his grandmother’s final song every night: “I Want to Walk You Home” by Fats Domino. She would tell skaters to change direction and put on the last song of the night.

“That would be the last song that would be played, and that’s personal for me,” Scott said.

For more, visit the Facebook Past Skaters from the Brownsdale Roller Rink at www.facebook.com/groups/brownsdaleskaters/ and people are invited to share memories of the old rinks.