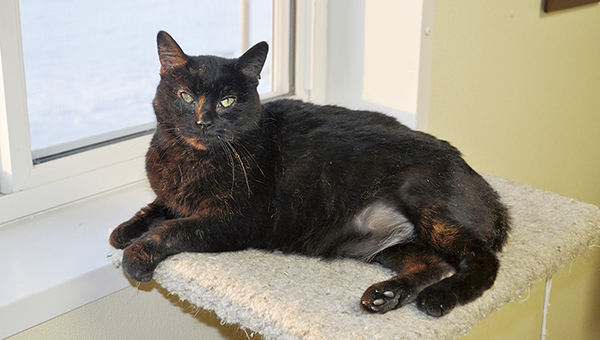 Freddie Mac sits in the fading sun as she gets a new family Tuesday afternoon. — Photos by Jenae Hackensmith/jenae.hackensmith@austindailyherald.com

Some of the cats at the Mower County Humane Society have been without a permanent home for a few months or a year. Others have been at the shelter for more than six years. 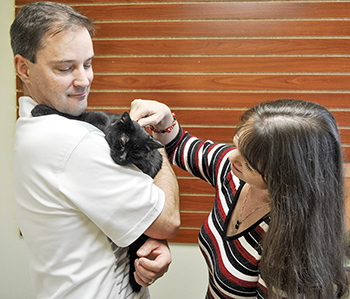 Robert and Robin Hanson hold their new cat Freddie Mac as they go through the adoption process at the Mower County Humane Society Tuesday. Freddie Mac had been at the shelter about six years. The couple had adopted two cats from the shelter previously.

But one of those cats found its forever home Tuesday when Robin and Robert Hanson adopted Freddie Mac, a black-coated female cat who has been at the shelter for about six years.

“They’re all wonderful cats,” Robin said. “They’re all deserving of a home, and they all need a home.”

Freddie Mac was already warming up to Robert during the adoption process Tuesday. The easy-going feline roamed a small room, laid in the sun coming through the window and hid inside a cat-box propped on the wall.

The Hansons chose Freddie Mac because she was the longest-waiting female, and she had black fur which made her harder to adopt out.

Robin hopes more of the older cats will be adopted.

“I just want people to go in there and say ‘Which ones waited the longest?’ and take them home,” Robin said.

Robert said they have had good experiences with their cats, even though they got them when they were full-grown felines instead of kittens.

“A lot of people like to come in and grab a kitten because they want a kitten and they’re cute,” he said. “But the ones that have been here the longest, they’re very mellow, they’re sweet. We’ve had great experience with the older cats.” 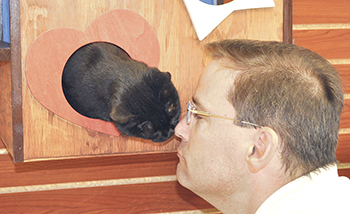 Robert Hanson touches noses with his and his wife Robin’s new cat Freddie Mac as they go through the adoption process at the Mower County Humane Society Tuesday. The female feline has been at the shelter about six years. The couple has adopted two cats from the shelter previously.

The Hansons moved from Austin in 1985 and lived in Minnesota most their life before recently moving to Texas due to a job offer for Robert. One of their previous cats recently passed away, so the couple decided to adopt a new family member while they were in Austin visiting family. Robin contacted the humane society, asked them to send her a list of cats that had been there the longest, and went from there. They chose to adopt from Mower County because they are large supporters of the shelter and the good the volunteers do.

“We love them,” she added. “They’re like an awesome organization.”

The Hansons also appreciated the volunteers’ effort to match the cat to their family and their three other cats.

“They do a great job, the volunteers at the humane society, to try to pair up cats with other cats,” Robert said. “They’re not going to give us a cat that hates other cats.”

The humane society is a no-kill shelter, which means the animals who aren’t adopted have to wait, and sometimes it’s a long wait. The shelter has about 140 cats currently, and when one is adopted out it is replaced by another almost immediately. Many of the animals, like Freddie Mac, are found within the Austin city limits and come from the pound. The shelter has about eight cats that have been there around the same time as Freddie Mac. The shelter also currently has about 35 dogs waiting to be adopted.

Cats at the MCHS the longest: