Boys basketball: Packers get scoring boost from freshman in win over Panthers 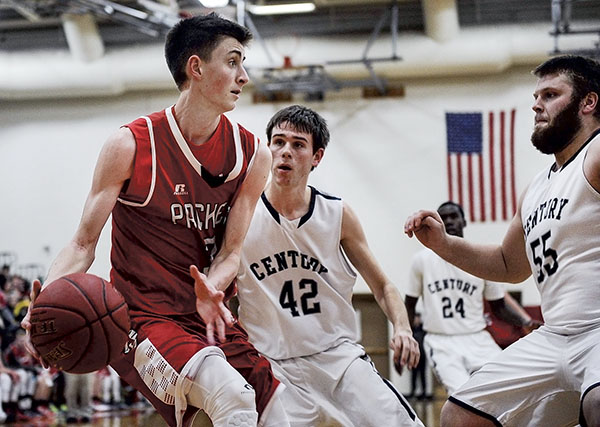 Austin’s Levi Vierkandt looks for room along the baseline during the first half against Rochester Century. Eric Johnson/photodesk@austindailyherald.com

Austin guard Both Gach may only be a freshman, but he’s starting to establish himself as a consistent scorer for the Packer boys basketball team.

Both led Austin with 14 points as the Packers led for most of the night in a 61-47 win over Rochester Century in Packer Gym Friday night. 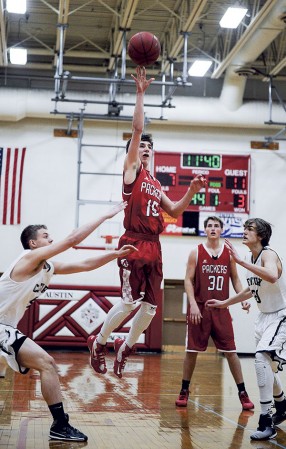 Austin’s Dylan Gasner floats a shot in the lane during the first half against Rochester Century. Eric Johnson/photodesk@austindailyherald.com

Both knocked down four 3-pointers in the win and he also made some plays of the dribble to get Austin’s offense going.

“His shooting statistics right now are flat out incredible. The kid is just a great shooter,” Austin head coach Kris Fadness said. “The nice thing is he’s handling the ball very well and he’s making good decisions with the ball. He’s improving every phase of his offensive game right now.”

Since he started receiving major minutes, Both has averaged 12.3 points per game over six contests and he’s scored at least nine points in every one of those games. He is getting more and more comfortable with every minute he plays.

“It’s kind of feeling a little easier,” Both said. “We have to work as a team and pass the ball around with movement. That’s when things start working.”

Both has already earned the respect of his teammates — including that of senior Noah Brehmer.

“Thumbs up to him, he’s playing amazing,” Brehmer said. “He’s shooting the ball very well and that’s necessary for us.”

Brehmer had one of his better games of the season against Century as he finished with seven points, five rebounds and five steals. The Panthers (1-8 overall, 1-7 Big Nine) had pulled to within 46-38 when Brehmer hit a big 3-pointer from the wing to make it 49-38 Austin with seven minutes left in the game.

“Last year I was looking to shoot the three ball a little more, this year I’m trying to stay inside a little more. Tonight I found myself on the 3-point line a couple of times,” Brehmer said. “We just have to work on closing the game stronger. The key thing is for us to start playing better down the stretch. We seem to find a way to be in it every time, no matter how good a team is.”

Austin’s defense did a lot of the work on Friday as it forced 23 Century turnovers. The Panthers used an early 13-2 run to go up 13-7, but Austin came back with an 11-0 run that saw Nik Gasner hit back-to-back 3-pointers. The Packers would never trail again.

“I thought Levi [Vierkandt] did a nice job up top and we got some steals,” Fadness said. “The bugaboo continues to be rebounding. I thought Noah Brehmer stayed patient and did a good job inside, but we’ve got to have people help him.” 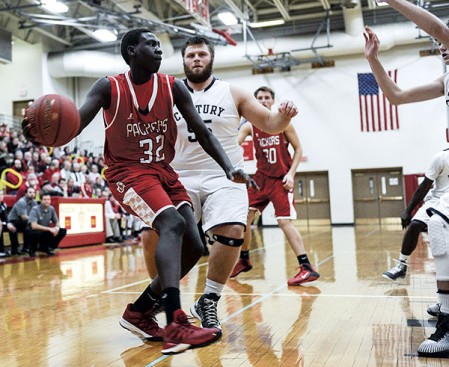 Austin’s Oman Oman dumps the ball off the drive during the first half against Rochester Century Friday night in Packer Gym. Eric Johnson/photodesk@austindailyherald.com

The Packers (4-4 overall, 4-3 Big Nine) have battled some sickness this week, but they still managed to give Red Wing a good game on the road Tuesday in a 45-41 loss and they came through with a big win on Friday. Fadness said all of the team’s roles are defined and he likes what he’s seen so far from his squad.

“I like our guys. We’re 4-4 and we easily could be 8-0, the four losses we’ve had, we’ve been ahead in the second half,” he said. “I think we’ve shown that we’ve got the capabilities to win a section and be section contenders. At the same time, we’ve got to eliminate those stagnant offensive moments and I think that’ll come.”

Gach Gach had 11 points, six rebounds and three blocked shots in the win for Austin. 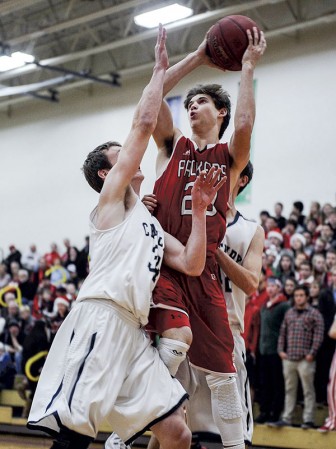